Brahmastra' to be released on Dec 4 this year 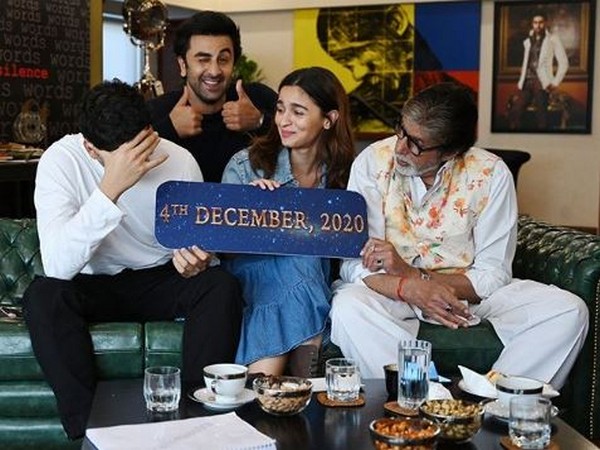 The first installment of the much-awaited trilogy will be released in five languages - Hindi, Tamil, Telugu, Malayalam, and Kannada.
The 47-year-old filmmaker Karan Johar hopped on to Instagram to share the release date of the film along with a caption that reads, "It's final! Brahmastra releases on 4th December 2020 in Hindi, Tamil, Telugu, Malayalam, and Kannada! #Brahmastra"

Along with announcing the release date, Karan Johar shared a candid snap featuring some of the key members from the ensemble star cast. In the frame, Alia Bhatt is seen sitting in the middle of a couch while she holds a placard with the date "4th December 2020" along with Amitabh Bachchan and Ayan Mukherji, Ranbir Kapoor has also been captured in winking along with thumbs up and a smile.

Amitabh Bachchan confirmed the date on Twitter and wrote, T 3429 BRAHMASTRA.. coming to cinemas on 4/12/20 & Ayan is NOT allowed to change it now! #Brahmastra #RanbirKapoor @aliaa08@iamnagarjuna@RoyMouni#AyanMukerji@ipritamofficial@karanjohar@apoorvamehta18#NamitMalhotra @MARIJKEdeSOUZA@DharmaMovies@FoxStarHindi@BrahmastraFilm."
Alia Bhatt also shared a hilarious video in which Ranbir Kapoor is seen candidly arguing with Ayaan Mukherji about the release date. After which Ayan Mukerji's 'Brahmastra' after facing several delays finally gets zeroed in on a release date. To which Amitabh Bachchan announces the date of the release as of December 4, 2020.

Ranbir Kapoor shared the same video on Instagram along with a caption "brahmastra "with a heart emoji.

'Brahmastra' is the first part of a sci-fi trilogy that has been created by Ayan. The film has been extensively shot in Bulgaria, New York, and Mumbai, among other places.
Apart from Ranbir and Alia, the film also stars Amitabh Bachchan, Mouni Roy, and Tollywood actor Nagarjuna. (ANI)
ADVERTISEMENT