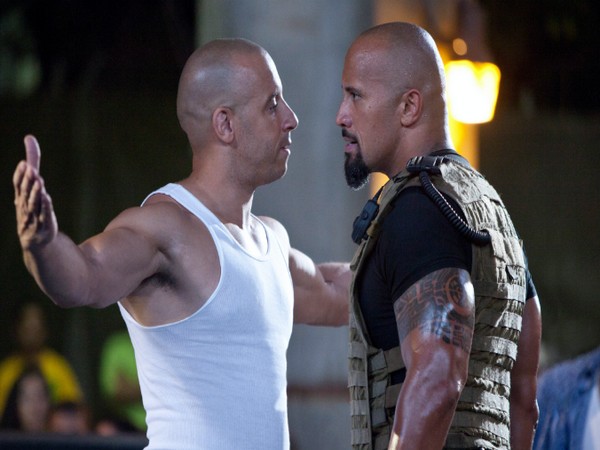 Washington [US], October 13 (ANI): Actor Dwayne Johnson has recently opened up about his long-time beef with 'Fast and Furious' co-star Vin Diesel and also commented on why the much-talked-about Vin's Instagram post "was not the right thing to do".

The Hollywood Reporter quoted Dwayne from his interview for November cover story for Vanity Fair, where he elaborated on his much-talked-about beef with Vin, including the now-deleted post in which the former praised his female co-stars on 'The Fate of the Furious' while criticizing the professional conduct of "some" of his male co-stars.
It has since been revealed that the post was an indirect reference to Vin, with Dwayne revealing to the magazine that "nothing specific happened" when he decided to post it, "just the same old shit."
The 'Red Notice' actor also admitted that it "just wasn't my best day," despite having no regrets about what he said in the post. "I meant what I said. For sure. I mean what I say when I say it, but to express it publicly was not the right thing to do," he said.
"It caused a firestorm, yet interestingly enough ... [it was] as if every single crew member found their way to me and either quietly thanked me or sent me a note. But, yeah, it wasn't my best day, sharing that. I shouldn't have shared that. Because at the end of the day, that goes against my DNA. I don't share things like that. And I take care of that kind of bullshit away from the public. They don't need to know that. That's why I say it wasn't my best day," the 'Jungle Cruise' star added.
In an earlier interview with The Hollywood Reporter, Dwayne said that he had agreed to return for the 'Fast and Furious' series' eighth chapter -- which he implied would be his last in the main franchise, on the condition that he and Vin would not share scenes together. He further explained that he did the same to "forgo drama" and "that was the best thing to do. For everybody."
Dwayne had also clarified that a reported meeting between the two on set in his trailer was not really a "peaceful" coming together, but at least for him, there was an understanding that he and Vin are "philosophically two different people and we approach the business of moviemaking in two very different ways."
He stated, "Well, there was a meeting. I wouldn't call it a peaceful meeting. I would call it a meeting of clarity. He and I had a good chat in my trailer, and it was out of that chat that it really became just crystal clear that we are two separate ends of the spectrum. And agreed to leave it there."
As per The Hollywood Reporter, the 'Black Adam' actor struck down several ways Vin has characterized their clash and relationship. He also gave a notable statement in the Men's Health magazine from Vin Diesel that explained their conflict as a result of the 'Fast lead' pushing the former to deliver his best work as someone coming from a wrestling background.
The Hollywood Reporter quoted Dwayne saying, "one part of me feels like there's no way I would dignify any of that bullshit with an answer," he did ultimately point to how he "came up differently and was raised differently" and is from a different culture and environment.
Dwayne says that has given him a different philosophy than Vin, and one where "I go into every project giving it my all."
"It's the philosophy of going into work every day. Looking at everybody as equal partners. And looking at the studio as equal partners. And looking at the crew, regardless of where you're at, either on the call sheet or otherwise, as equal partners -- with respect and with humility, and being respectful of the process and every other human being who is putting in just as much time, just as much hard work and sweat equity, if not more," he said.
Dwayne added, "I think it's always been important to me to always be straight up and look somebody in the eye. And if you say you're going to do something, do it." (ANI)
ADVERTISEMENT