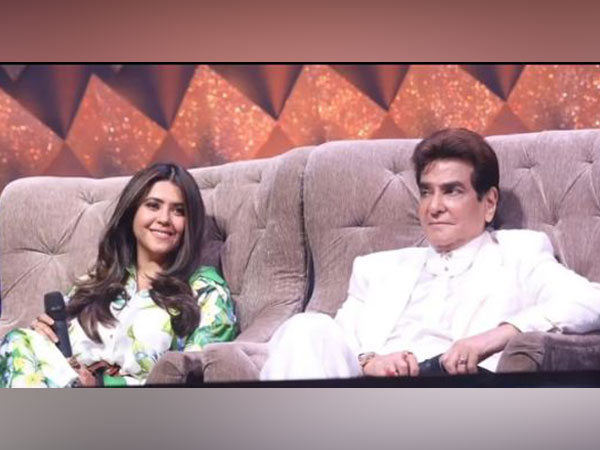 The 45-year-old took to her Instagram handle and shared a video featuring some priceless throwback pictures and videos from her photo gallery along with the sweetest caption.
Ekta wrote, "Happie bday papa! U r d wind beneath My wings!!! U helped me grow n supported me when I chose to b a producer! Love is acceptance u taught me that! Love u."

The video included some unseen photographs of the veteran actor spending time with his wife Shobha Kapoor and his grandsons- Ravie Kapoor and Laksshya Kapoor.
Proclaimed as 'Jumping Jack' of Bollywood, Jeetendra is known as one of the most successful stars of Indian cinema.
Jeetendra was born as Ravi Kapoor in Amritsar, Punjab, to Amarnath and Krishna Kapoor, whose business dealt with imitation jewellery, supplied to the film industry. He attended St Sebastian's Goan High School in Girgaum, Mumbai with his friend and late actor Rajesh Khanna, and then studied at Siddharth College in Mumbai.
While supplying jewellery to late Indian filmmaker V. Shantaram, he was selected to feature Sandhya's character's double in the 1959 movie 'Navrang'.
The 'Caravan' actor got the first major break of his film career with V. Shantaram's 'Boond Jo Ban Gayee Moti' in 1967. However, it was the 1967 film 'Farz' that served as his stepping stone to success.
The T-shirt and white shoes he picked up from a retail store for the 'Mast Baharon Ka Main Aashiq' dance number in 'Farz', became his trademark. 'Farz' was followed by films such as 'Caravan' and 'Humjoli', in which Jeetendra had more dance numbers.
Whether it is his badminton style sporty dancing in 'Dhal Gaya Din', the hook dance steps in 'Naino Mein Sapna' and the PT style dancing in 'Taki Taki,' the Jumping Jack of Bollywood nailed it all.
After giving his glorious 50 years, as an actor in Bollywood, the senior star is currently embracing his grandfatherhood in Mumbai with his grandkids, Ravie Kapoor and Laksshya Kapoor. The senior actor also serves as the chairman of the Balaji Telefilms, Balaji Motion Pictures and ALT Entertainment. (ANI)
ADVERTISEMENT