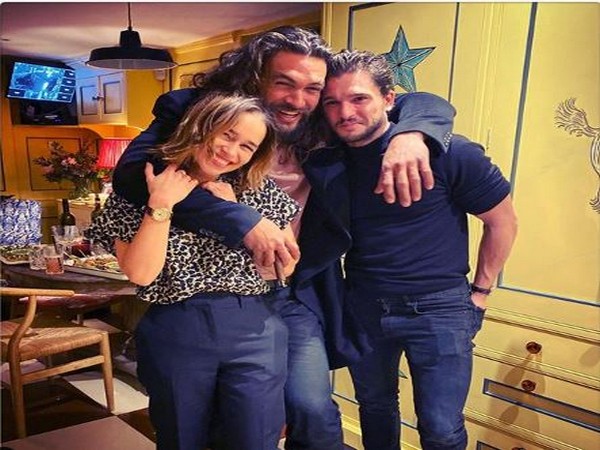 Washington D.C [USA], Oct 27 (ANI): The 33rd birthday of actor Emilia Clark could not have got better as she reunited with her HBO hit series 'Game of Throne' stars Jason Momoa and Kit Harrington.

Jason played the role of Khal Drogo, and Kit, who played the role of Jon Snow were the ones spotted spending time with the birthday girl.
"Reunions never looked this hairy. #anyexcuseforamomoasandwich @prideofgypsies #birthdaybonazaparttwo," the actor captioned the picture on Instagram.
Momoa who was quick enough to comment and wrote, "Happy birthday love. So stoked I got to see you [heart eyes emoji]."
The hit series ended its run earlier this year after a controversial eighth season. Clarke and Harington last appeared together in public along with their co-stars at the 2019 Emmy Awards in Los Angeles, during which the show won 12 awards, including Outstanding Drama Series for the fourth time.
While good friends Clarke and Momoa, have reunited many times over the years. (ANI)
ADVERTISEMENT