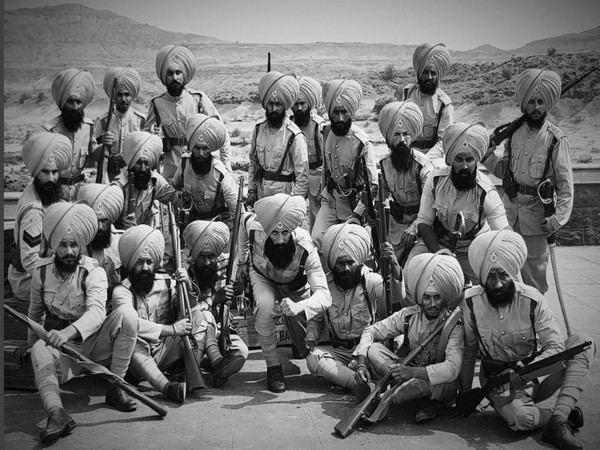 New Delhi (India), Sept 12 (ANI): Akshay Kumar who left the audience stunned with his performance in 'Kesari' paid tribute to the "brave hearts" of the 36th Sikh Regiment on the 122nd anniversary of The Battle of Saragarhi.

In order to pay his heartfelt tribute to all the courageous souls, Bollywood's 'Khiladi' shared a monochrome picture from the sets of his period drama film 'Kesari' which was based on the 1897 Battle of Saragarhi, where an army of 21 Sikhs fought against 10,000 Afghans.
In the picture, the actor who played the role of Havildar Ishar Singh can be seen posing with his army of Sikhs.
"My tributes to the brave hearts of the 36th Sikh Regiment, 21 Against 10,000...a sacrifice which will forever be etched in the pages of history and our hearts #SaragarhiDay," the 52-year-old actor tweeted. 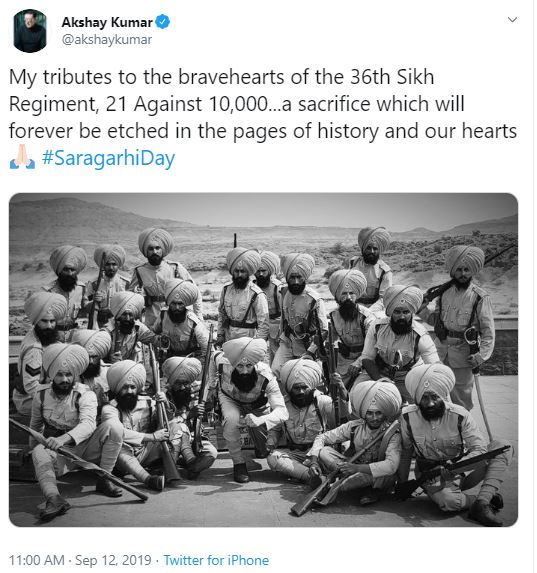 The film was directed by Anurag Singh and also starred Parineeti Chopra in a pivotal role.
The Battle of Saragarhi was fought before the Tirah Campaign on September 12, 1897, between the British Indian Empire and Afghan tribesmen. It occurred in the North-West Frontier Province (now Khyber Pakhtunkhwa, Pakistan). Sikh soldiers fought on behalf of the British Indian Army against Pashtun Orakzai tribesmen.
The British Indian contingent comprised 21 Jat Sikh soldiers of the 36th Sikhs (now the 4th battalion of the Sikh Regiment), who were stationed at an army post and were attacked by 10,000 to 12,000 Afghans.
'Kesari' which smashed box office collections and entered the Rs. 100 crore club in just seven days of its run, had received a special gift from its star-cast. Parineeti who was extremely happy with the film's success celebrated it in a unique way.
She had lent her voice for the female version of the period drama's hit song 'Teri Mitti,' which became a hit soon by beating the rest of the chartbusters.
On the work front, Akshay has films like 'Good News,' 'Housefull 4' and 'Prithviraj' in his kitty. (ANI)
ADVERTISEMENT