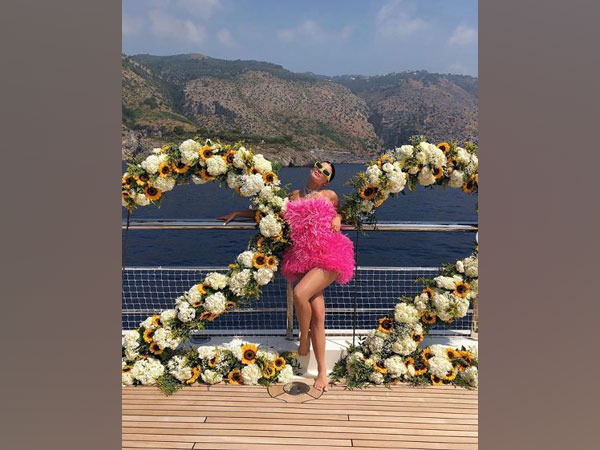 Washington D.C. [USA], Aug 11 (ANI): American reality star and makeup mogul Kylie Jenner celebrated her 22nd birthday in style while vacationing in Italy with her beau Travis Scott, family, and friends.
The 22-year-old makeup mogul documented her birthday on Instagram on Saturday night. Scott and her friends serenaded her with "Happy Birthday" as the group lounged on a yacht.

The staff members presented the birthday girl with a plate full of shots, adorned with sparklers. "Officially my birthday," she captioned the video.
The reality star showed off her grand gift from her boyfriend: a diamond necklace featuring her signature 'Kylie Cosmetics' logo, accentuated in rose and white gold. "Omg," she wrote, adding heart, crying and heart-eye emojis.
The venue's setup was very summery, decorated with a sunflower and hydrangea floral masterpiece crafted into a "22." She posed alongside the arrangement on a yacht while wearing a pink, feathery dress and sunglasses. The vessel was filled with yellow and white balloons too.
Jenner hogged on fine food, including pina coladas, fruit, and pastries.
Sofa Richie, Scott Disick, Kris Jenner and Kylie's 18-month-old daughter, Stormi, were among the famous faces, who travelled with her to Italy for her birthday bash. The group boated to dinner in Capri, Italy on Thursday, reported Us Weekly.
Jenner looked all relaxed and elegant in a peach tie-dye maxi dress and a wide-brimmed hat.
The makeup mogul sparked wedding rumours when she was spotted boarding a private plane with a white dress on Tuesday. However, an insider told Us Weekly she is "not getting married right now or off to her wedding."
The source also clarified that her relationship with Scott is rock solid.
"She and Travis are doing great," the insider noted. "There is always talk about them having another baby, but she's enjoying being a mom and doesn't exactly want to get right back into being pregnant again," the source added.
On the work front, Kylie recently launched her skincare range and was called out by people for her skincare routine. The 21-year-old star received flak for using the foaming face wash and still ending up with a lot of makeup on her face. She also faced backlash for using a filter while washing her face using products from her skincare range. (ANI)