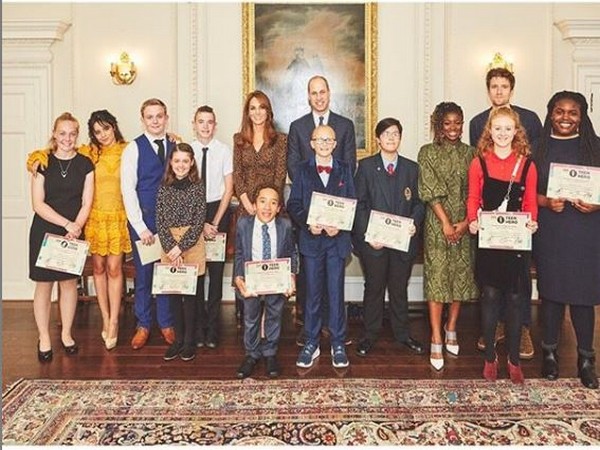 The Duke and Duchess of Cambridge revealed that they honored the 10 finalists in the BBC Radio 1 Teen Heroes Awards earlier this month, reported People magazine.
Kate who sported a L K Bennett vintage silk midi dress was joined by singer Camila Cabello.
"I was so honored to be invited to Kensington Palace to meet and celebrate this year's Teen Hero finalists with the Duke and Duchess of Cambridge," said Cabello.
"Hearing the incredible things these Teen Heroes have done is so inspirational! Their passion and dedication to help others is amazing and they really blew me away," she added.
Now in its tenth year, 'Teen Heroes' honours 12 to 17-year-olds who inspire others, show courage and bravery or make a difference in their communities. Many have also overcome difficult times to become campaigners, fundraisers, ambassadors or volunteers.
Three winners will be crowned Teen Heroes of 2019 in front of an audience of 14 to 17-year-olds at the Radio 1 Teen Awards on Sunday, November 24.
This includes 12-year-old winner Hazel, who lives with a rare genetic disorder called xeroderma pigmentosum (XP) that limits the ability of her body to repair damage caused by UV light.
Despite being advised by doctors to remain indoors from the age of 3, Hazel has made a film and delivered a series of high school speeches to raise awareness of XP. Earlier this year, she also climbed the 3000-ft high Ben Lomond in Scotland, raising $2,500 for charity. (ANI)
ADVERTISEMENT