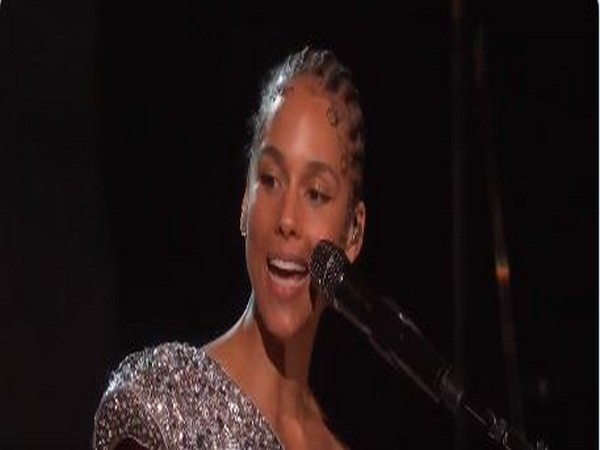 Washington D.C [USA], Jan 27 (ANI): Grammy host Alicia Keys set a perfect tone towards the end of the 62nd edition of the awards on Sunday and gave a soothing-yet-empowering mash-up melody.

She took the centre stage, donned in shimmery silver one-shoulder gown, and a hairdo bringing perfection to complete the look.
Giving a rather relived background music as she played the piano, she began the performance by saying what 'a hell of a week' it was.
Alicia who has taken up the Grammy stage for the second time as a host said she feels proud to be on the stage as an artist, for the artists and the people's energy will make the night an amazing one.
The performance was then followed by her pitching towards for a happier, brighter, and positive space as it is the new decade.
"We refuse the negative energy. We refuse the whole system. Feel me on that. We want to be respected and safe in our diversity. We want to be shifting to realness and inclusivity," she said.
From Billie Eilish to Lizzo to Ariana to Beyonce, the Grammy host addressed them for their incredible talent and the accolades gained.
"We've got the incredible Billie Eilish right here in this building! That's right, that's my little sister right there. We got Lizzo who just owned the stage -- eight nominations and already a winner tonight. We have the magnificent Ariana right here in the building tonight! That's right, you see us? Unstoppable," she continued.
Earlier at the beginning of the 62nd edition of Annual Grammy Awards, the host took off on an on a sombre tone with the news of legendary basketball player Kobe Bryant's death.
Alicia Keys paid tribute to the star who lost his life in a helicopter crash at the age of 34 along with his nine-year-old daughter.
The Hollywood's biggest musical gala was a night for the 18-year-old Billie Eilish, who made history not just by being the youngest nominee in the all four general categories but also the one who took the top four honours glory home. (ANI)
ADVERTISEMENT