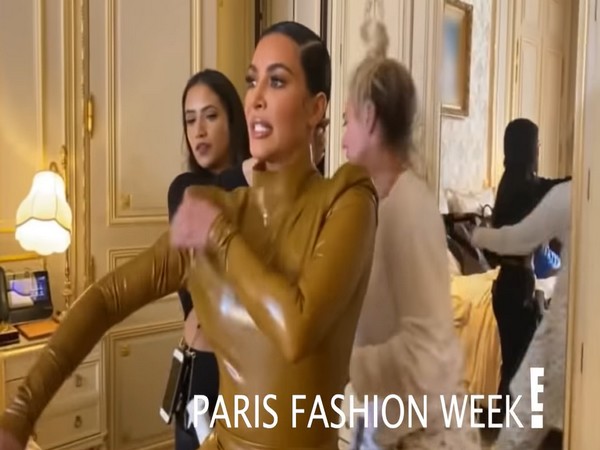 Washington D.C. [USA], Mar 23 (ANI): American reality TV star Kim Kardashian West loves skin-hugging latex dresses, but in a new 'Keeping Up with the Kardashians' sneak peek, fans get a look at the struggle she faces to get into the ensembles.

According to People magazine, earlier this month, the beauty mogul debuted some of the latest looks from Balmain's fall 2020 collection during Paris Fashion Week, including some 'fresh off the runway' latex suits.
The Skims creator shared some footage of the many different outfits waiting for her in her room on her Instagram story earlier this month, and said, "I just got to Paris and look who is in my room."
The 39-year-old reality TV star said of the different pieces, "She is cute, fresh off the Balmain runway, wow. You guys. Oh my God, this is insane. Olivier [Rousteing- French fashion designer] you are too good to me."
In a new teaser video, Kardashian West wore two of the latex looks while she was out in Paris. The 'KUWTK', fans will get to see the reality star wiggle her way into one of the skin-tight outfits, with the help of her styling team.
While pulling at the sleeve of the suit, Kim was seen saying in one of the clips, "S***, it's stuck to my skin, I literally feel like I pulled a muscle in my shoulder. This is a f***ing fashion week."
Several clips of Kardashian West grunting and swearing are seen in several clips as she tries to tug the pants on over her backside along with two members of her team, at one point even worrying that they may have ripped them.
Later in the video, Kim is seen practising some breathing exercises while putting the matching jacket and gloves on, joking that she's about to be "boxed in".
Kourtney Kardashian also made an appearance in the footage sporting her own designer latex outfit, wondering how she would go to the bathroom. She said of needing to go to the restroom, "I'm gonna hold it."
To which someone from the crew added, "You're going to have to hold it until like, 2 [p.m.]"
Hairstylist Chris Appleton was also there with Kim, sewing in the "matching latex hair tie" into her long ponytail. (ANI)
ADVERTISEMENT