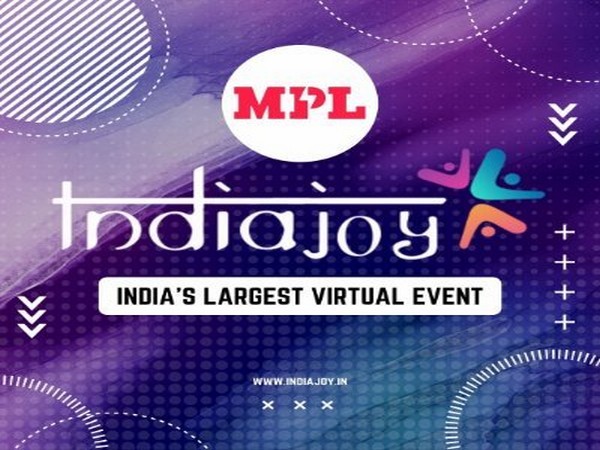 Hyderabad (Telangana) [India], October 22 (ANI): Asia's biggest digital entertainment festival IndiaJoy, will be held this year virtually from November 16 to 19, according to a release.

Mobile Premier League (MPL), Asia's largest esports and skill gaming platform has become the presenting sponsor of IndiaJoy 2021. The annual event is hosted by Telangana Virtual Animation and Gaming Association (TVAGA) and supported by the Government of Telangana.

The release said that digital entertainment festival, in its fourth edition, is bringing together businesses, business leaders, content creators, professionals across gaming, animation, digital media, and entertainment sectors, and will feature VFX, OTT Pulse, Influencer Conference, and DesiToons.
KT Rama Rao, Telangana Minister for Municipal Administration and Urban Development, Industry and Commerce, IT and Industries, said, "In the past three editions, IndiaJoy has played a significant role in boosting the AVGC sector in Asia. It has also helped shine a spotlight on the city of Hyderabad as one of the important hubs in the global digital entertainment industry. The Media and Entertainment sector is expected to grow at a CAGR of 13.7 per cent to reach INR2.23 trillion (USD 30.6 billion) by 2023."
"Telangana Government has been at the forefront of harnessing the new digital entertainment revolution that requires a state to promote the use, adoption, and adaptation of cutting-edge technologies. We continue to build a robust ecosystem, infrastructure base to promote leading-edge technologies which is a must for success. Initiatives such as Image Towers and hosting global scale events like IndiaJoy which encompass Animation, VFX, OTT, and Gaming have catalysed the growth of the sector both in Hyderabad and in India. Our vision is to make IndiaJoy an event that the world looks forward to every year." he added.
Jayesh Ranjan, Principal Secretary of the Industries and Commerce (I and C) and Information Technology (IT) Departments, Government of Telangana said, "India has lately seen tremendous growth in the creative tech and digital sector (AVGC Sector) with an estimated reach of 3 lakh crore (approx. USD 44 Billion) by 2024. Hyderabad has always been the epicenter of growth in this sector and Telangana Government has played a key role in promoting this ecosystem. Now we are at a juncture witnessing rapid growth, it entails a lot of strategic value to keep the momentum by continuing to support such a mega event like India Joy."
Rajiv Chilaka, Mentor, TVAGA, Founder and MD, Green Gold Studios, said: "As we welcome the 4th edition of IndiaJoy, it gives me great pleasure that Green Gold Studios has contributed to bringing the best creators, producers, broadcasters, business, and creative heads onto a single platform. IndiaJoy was established to celebrate the success of the industry, exhibit the talent within it and provide a space for the leaders of the AVCGI to deliberate the way forward. We have accomplished all that in our previous editions, and we look to continue building the event to encompass more ideas, individuals, and technology."
The release said Indian Media and Entertainment industry is witnessing a new era of game-changing development and IndiaJoy will see pioneers from the sector sharing their insights.
In the past editions, IndiaJoy attracted exhibitors from across the globe, including Adobe, Netflix, Sony, British Columbia, Moiba, Gametion, Australian Trade Commission, Victoria Trade, Unity Epic, and Homa Games.
This edition of IndiaJoy is expecting international participants from more than 50 countries and globally recognised, prominent AVGC and many tech giants are set to share advancements in new and emerging technologies.
"We are thrilled to present this year's edition of IndiaJoy along with TVAGA and the Government of Telangana. Hyderabad has emerged as the next big gaming destination after Bengaluru, and an event like IndiaJoy--which brings together all stakeholders under one roof--will further boost engagement within the sector. Our vision at MPL is to revolutionise the mobile gaming and esports landscape not just in India but the world and we look forward to sharing our experience and insights and delve deeper into ideas that will propel the industry forward," said Sai Srinivas, Co-Founder, and CEO, Mobile Premier League (MPL).
Sunil Chakravarthi, Program Director, IndiaJoy, said that Telangana, the youngest state in the country, has organized and hosted world-class events.
"IndiaJoy, the brainchild of Telangana has demonstrated significant success during its last three editions, and this global-scale digital festival is generating enormous interest among many AVGC industry experts," he said.
"While this edition is going to be virtual, we see it as an advantage, as the speakers and participants are boundless. Over 500 delegates, 18000 participants, 200 tracks, and 100 panel discussions confirmed already, we have already witnessed a 2.5X increase in participants this year, nothing less than an International physical event that is full of Joy, yes Virtual is Reality," he added.
Since its inaugural edition, IndiaJoy enjoyed a record-high number of visitors to attract more than 30,000 plus participants, visitors, and global delegates including attracting investments of USD10 million for the past 3 years and catalysed the emergence of start-ups.
IndiaJoy is the largest congregation of gaming, animation, VFX, E-Sports and Entertainment Events in India, the release said, adding that IndiaJoy is an aggregator platform, bringing together prestigious international events in one place to unfold opportunities for investors, corporations, studios, content developers, delegates, consumers, hardware manufacturers and students, through series of networking, trade exhibitions, product launches, B2B and B2C events. (ANI)
ADVERTISEMENT