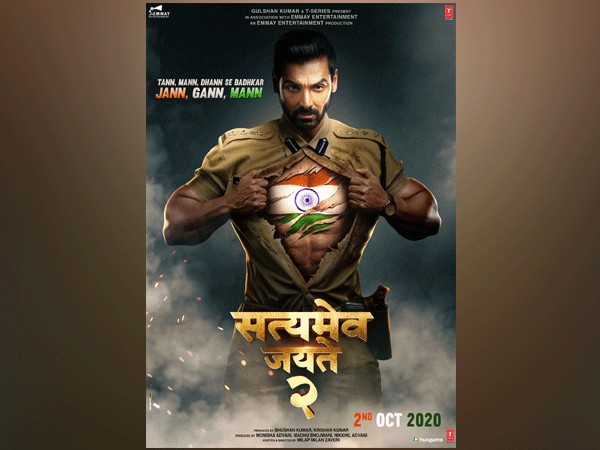 New Delhi (India), Oct 1 (ANI): Bollywood superstar John Abraham has unveiled the first look poster of 'Satyamev Jayate 2' - the second installment of his action-packed 2018 hit - which certainly seems promising in terms of a bigger sequel on offer for movie buffs.

In the poster, the actor is tearing off his cop uniform to reveal the Indian national flag on his chest.
The 'Dishoom' actor said the film's aim is to entertain the audience with a relevant story.
"I genuinely enjoyed the story and telling of the original film. I could tell it was a story that the audience will find engaging. With SMJ2, the aim, once again, is to entertain the audience with a story that's relevant in today's times," John said.
He shared the poster on Twitter and wrote, "The truth prevails AGAIN!! Returning next Gandhi Jayanti, October 2nd, 2020." 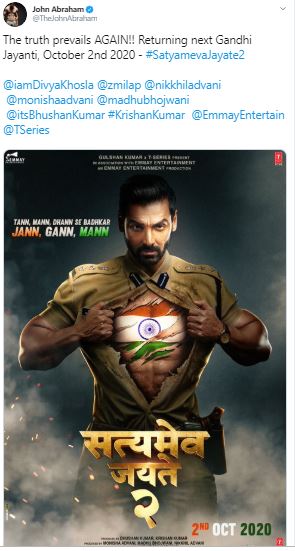 In the first part, John played the role of a vigilante who goes on a corrupt cop-killing spree, this time he is paired with Divya Khosla Kumar for the sequel.
The fresh pairing of John and Divya, who returns to acting after directing two movies of her own as a filmmaker, is the highlight of the project. "I didn't want to act in a film just for the sake of it. For me, what mattered was the story and the role, and I got the right opportunity with this film," said Divya about opting to play the lead.
Bhushan Kumar who is producing the project also shared the first look poster of his wife Divya. The 'Yaariyan' filmmaker dons a tri-colour outfit with her suit in white and her dupatta in orange and green, forming an outline similar to India's map. 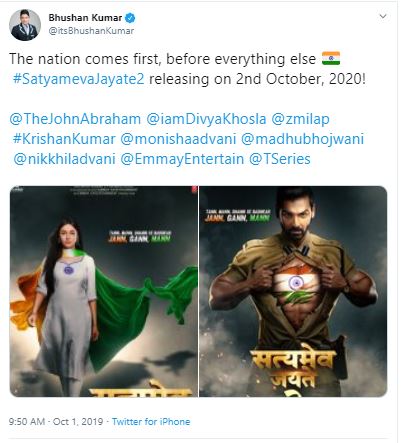