John Legend, DJ Khaled and others pay tribute to Nipsey Hussle at 2020 Grammys 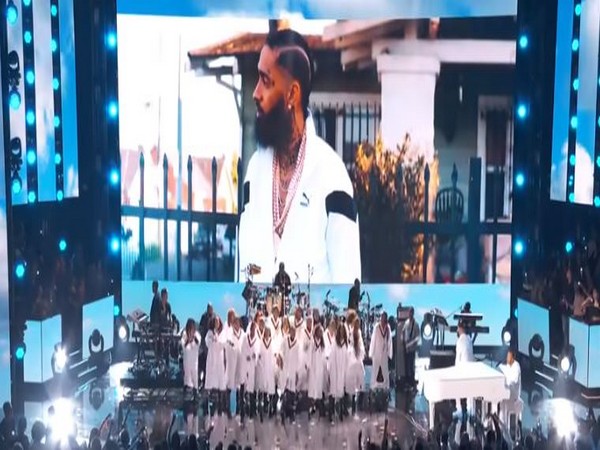 Washington D.C [USA], Jan 27 (ANI): Many from the music industry, including DJ Khaled, John Legend, Meek Mill and more, came together to give a posthumous honour to Nipsey Hussle at the 62nd Grammy Awards on Sunday.

Kirk Franklin, DJ Khaled, John Legend, Meek Mill, Roddy Ricch and YG came together to posthumously honour Nipsey Hussle at the 62nd Grammy Awards on Sunday.
Hussle was killed outside of his South Los Angeles clothing store in March 2019. The musician was shot multiple times and was rushed to a hospital, where he was pronounced dead. He was 33, cited The Hollywood Reporter.
American filmmaker Ava DuVernay addressed Hussle as the one "who made brave, brilliant strides in his community."
The posthumous tribute performance was opened by Mill rapping 'Letter to Nipsey.'
After referring to the letter Barack Obama wrote in Hussle's honour, he touched on the late musician's impact. "When we lost you, it really put some pain on me," he rapped. Mill continued, "Real hitters never die."
Mill's performance was then followed by Ricch who took the centre stage with his solo performance before DJ Khaled and John sang their collaboration with Hussle titled 'Higher'.
Legend played the piano and belted out the lyrics while a choir sang along with them.
American rapper YG also joined the stage to perform a part of the song. Franklin followed with his solo.
The late musician was also well known for his commitment to his local community, where he invested time and money into education and business programs.
The tribute performance also honoured Kobe Bryant, who died on Sunday. The basketball legend and his 13-year-old daughter, Gianna, along with seven others, were aboard his private helicopter when it crashed in Calabasas, California, cited The Hollywood Reporter.
Large photos of Hussle and Kobe Bryant were on display as the performance was being concluded.
The late rapper was nominated for three Grammys this year, including best rap song for 'Racks in the Middle' and best rap/sung performance for 'Higher.'
Hussle earned the best rap performance for 'Racks in the Middle' at the 2020 ceremony.
He was previously nominated at the 2019 ceremony in the best rap album category for 'Victory Lap'.
The 2020 Grammy Awards took place at the Staples Center in Los Angeles. Alicia Keys hosted the ceremony. (ANI)
ADVERTISEMENT