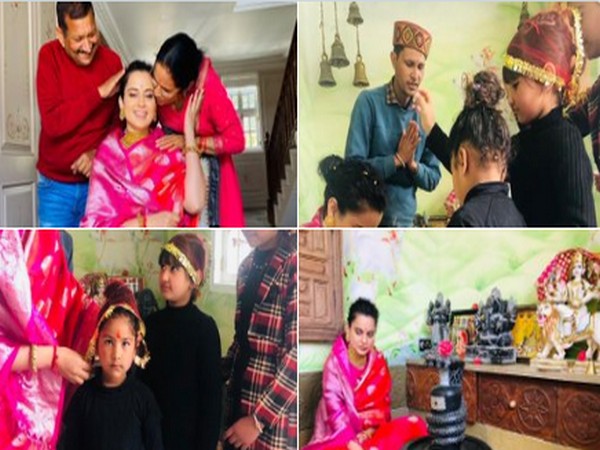 New Delhi [India], Mar 23 (ANI): As Bollywood's 'Queen' Kangana Ranaut turned 33 on Monday, she celebrated her birthday in a traditional style by performing pooja at her home in Himachal Pradesh.

The star on her birthday also performed Kanya Pooja at her house with her family.
Her sister and manager Rangoli Chandel took to Twitter to share pictures from her birthday celebration in which Ranaut could be seen dressed in a pink-coloured Banarasi saree.
In the pictures, the 'Tanu Weds Manu' actor is seen worshipping goddess Durga in the form of young girls and is also seen posing with her parents.
"Kangana performing Janamdin pooja and Kanya pooja, our parents organised, this is how they always celebrated our birthdays, Nava Graha pooja followed by worshiping Maa Durga in the form of little girls," Rangoli wrote as she shared the pictures.
In a later series of tweets, her sister also gave her Twitter fam a glimpse of the Himachali food that their mother cooked on the occasion of Kangana's birthday.
The actor is known the most for her roles in films like 'Queen', 'Gangster' and 'Tanu Weds Manu'. (ANI)
ADVERTISEMENT