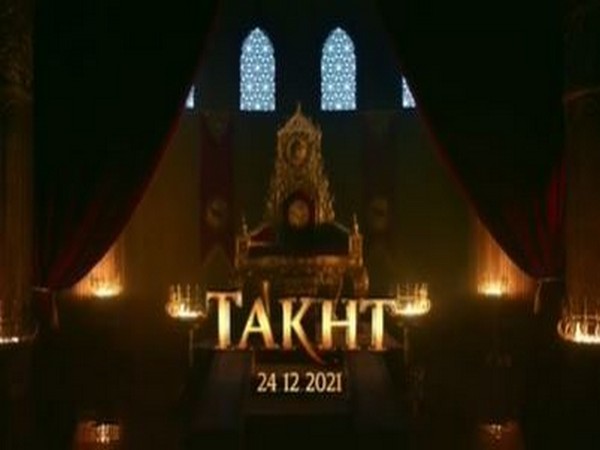 The 47-year-old filmmaker took to Instagram as he shared the first look of his magnum-opus in a post that read, "Presenting #TAKHT Produced by Hiroo Yash Johar, Karan Johar & Apoorva Mehta Screenplay by Sumit Roy Starring Ranveer Singh, Kareena Kapoor Khan, Alia Bhatt, Vicky Kaushal, Bhumi Pednekar, Janhvi Kapoor AND Anil Kapoor Releasing Christmas, 24.12.2021 Principal photography begins in March."
The enthralling video starts from a shot that focuses on a golden throne amid the royal corridor. The video is followed by an enthralling voice-over that says, "For Mughal Emperors, the path for the royal throne went through the coffin of their own people."
Taken over by a different rather appealing voice, "Perhaps the history of India would have been different if it followed the principle of 'Mohobbat' (Love)." The video ends with a date "24.12.2021."

Kjo also mentioned the ensemble cast including Ranveer Singh, Kareena Kapoor Khan, Alia Bhatt, Vicky Kaushal, Bhumi Pednekar, Janhvi Kapoor and Anil Kapoor.
'Takht' is a historical drama based on the story about the enemity between brothers caused by the succession of the Throne. In the movie, Vicky Kaushal will be seen essaying the role of Mughal Emperor Aurangzeb and Ranveer plays Dara, Aurangzeb's elder brother.
Helmed by Karan Johar, the movie's principal photography begins in March. The historical drama is set to hit the theatres on December 24, 2021. (ANI)
ADVERTISEMENT