Karan, Kangana, Ekta conferred with Padma Shri, congratulations pour in for the celebs 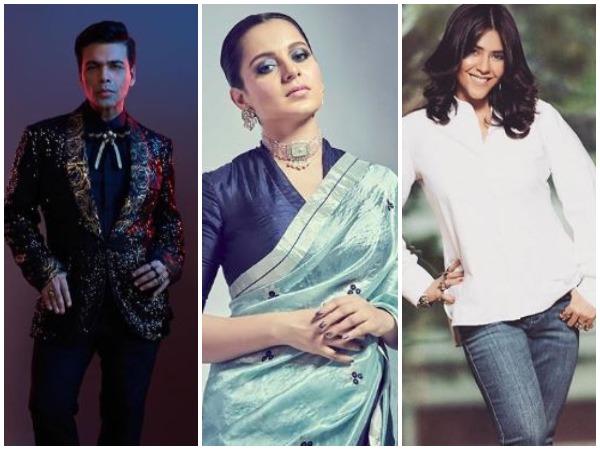 Filmmaker Karan Johar, actress Kangana Ranaut, and TV producer Ekta Kapoor on Sunday received heartwarming wishes after they were conferred with Padma Shri, one the highest civilian awards of India.

Humbled and elated, Karan Johar thanked his fans and also remembered his late father on the occasion and shared a short note on Twitter. The note reads, "It's not very often that I'm at a loss for words, but this is one such occasion. The Padma Shri... such an honour to receive one of the highest civilian awards in the country." 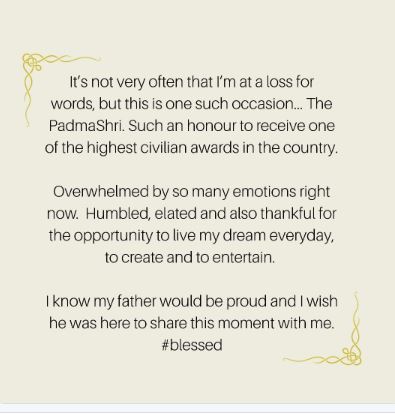 An array of B-town celebs congratulated Karan on the achievement. Genelia Dsouza congratulated in a Tweet that reads, "Dearest @karanjohar .. congratulations on receiving the PadmaShree .. I truly think you deserve it and am genuinely elated. Loads of love to you."

Ritesh Deshmukh also congratulated the filmmaker on this special occasion and wrote, "Dearest @karanjohar, thrilled to know that soon you will be known as #Padmashree Karan Johar - you truly deserve it my friend. More power to you, may you keep engaging, entertaining audiences all over the world with your craft. Love you."

Anil Kapoor shared a picture of Karan on Twitter along with a congratulatory message that reads, "Congratulations, @karanjohar!! This is incredible and well deserved!! May you keep adding more feathers to your hat!" 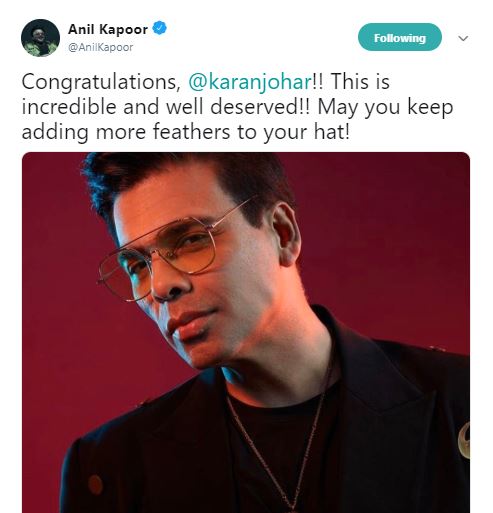 Friend of Karan Johar, Kajol also congratulated Karan on the occasion and tweeted, "@karanjohar congrats on this honour. Well deserved and sooooo happy for you !"

Tisca Chopra wished Karan and Ekta in a tweet that read, "Big congratulations on the #PadmaShree @karanjohar @ektaravikapoor .. both of you have had an indelible impacted Indian entertainment across the globe. So happy I have had a chance to work with you both. And may I also add that you both are owners of giant hearts."

Tiger Shroff shared a tweet that read: "Congratulations @karanjohar Sir on receiving the Padma Shri award! So so well deserved! Lots of love and congrats to the family as well."

Filmmaker Ekta Kapoor hopped on to Twitter while expressed immense happiness, and wrote,"Overwhlemed and emotional. My foray into the industry started when I was just 17. I constantly heard I was too young, too raw and it was too soon to make things happen. Through the years, I have realised it is never too soon to live out your dreams and being too young is probably the best thing. Today, as I am conferred with the 4th highest civilian honour, Padmshri, I'm humbled. " 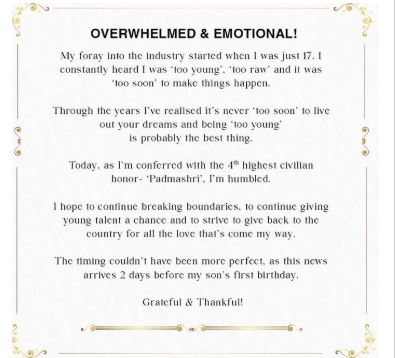 Filmmaker Goldie Behl congratulated Ekta in a tweet that reads: "Winning a national honour like the Padma Shri is an exemplary feat. Congratulations @karanjohar @ektaravikapoor for winning this award. So happy and proud of you both. Years of effort and hard work has paid off."

Riteish Deshmukh shared a tweet to wish Ekta, he wrote: "Dear @ektaravikapoor Your immense contribution to the landscape of entertainment industry as we see it today has been duly recognised - Congratulations on being awarded the #Padmashree - the ones who take risks are the ones who break barriers."

Rahul Bose congratulated Ekta by sharing a tweet that reads, "Wow congrats !!!! This is incredible."

Kangana Ranaut shared her feelings on being honoured to ANI, saying that "I'm humbled and I'm honoured. I thank my country for this recognition. I dedicate this to every woman who dares to dream. To every daughter... to every mother... and to the dreams of women who will shape the future of our country." 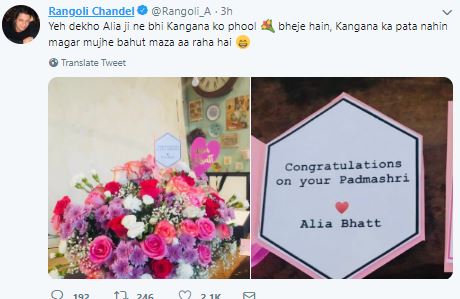 The team for her upcoming biographical-drama 'Thalaivi' celebrated Kangana's nomination in a cake cutting ceremony, Rangoli shared the pictures from the event that reads: "Team Thalaivi had a surprise celebration for Kangana during the rehearsals of their song in Chennai for film #Panga response and of course Padma Shri, how lovely !!!" 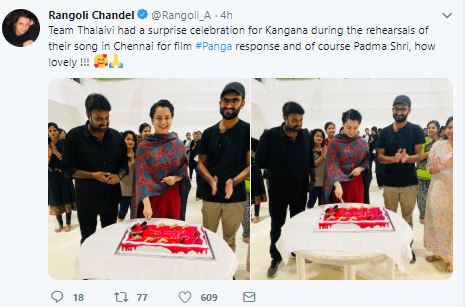 Adnan Sami shared his feelings in a tweet that reads: "The greatest moment for any Artiste is to be appreciated & recognised by his/her government. I am overwhelmed with infinite gratitude for being honoured with the 'Padma Shri' by the Government of India. It has been a 34 years musical journey..'Bohot Shukriya'!!#PadmaAwards." 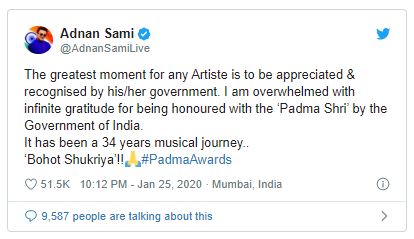