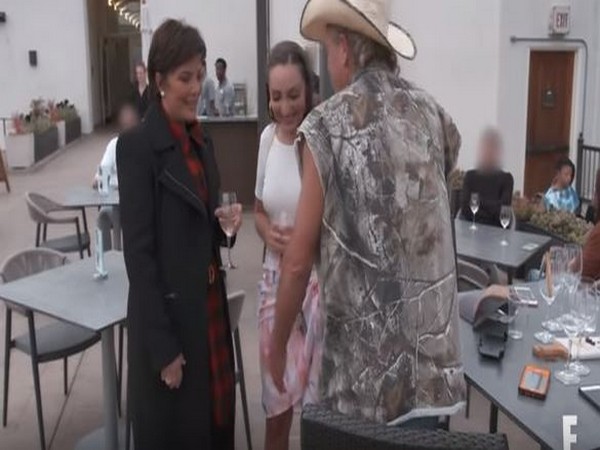 Washington D.C. [USA], Mar 16 (ANI): Kris Jenner, Kim Kardashian, Kourtney Kardashian, and Khloe Kardashian are seen enjoying wine-tasting while they make some new friends, in an exclusive sneak peek at Season 18 of 'Keeping Up With the Kardashians.'

According to E!News, the 'Keeping Up With the Kardashians' show, which premieres Thursday, March 26 (local time), Kris, Kim, Kourtney, and Khloe are seen enjoying some wine-tasting in Napa, California.
After Khloe compliments a colourful patron sitting near them on her eclectic outfit, Khloe dares her family to be a little more outgoing.
In the video, Khloe says before telling her mom: "You guys gotta start complimenting people, it makes them feel so good. This is your dare: I want you to go up to someone at a table, stand up, and I want you to go give them a compliment."
After this, Kris is immediately seen hitting off with a fellow Scorpio whose birthday is just one day after Kris. She completes the dare given by Khloe and tells a man in a cowboy hat and sleeveless shirt: "You look stunning."
She even takes a cigarette out of the gentleman's shirt and starts puffing on it.

The man even tells Kris that his daughter and wife just loves her, and shouts out to Kim, Khloe, and Kourtney: "Damn good-looking family! Almost as good looking as we are."

To which Khloe replies: "Almost! We're not there yet."

The man complements Kris saying, "You're a sweetheart, I'll tell you what, And just prettier in person."
After Kris' hilarious encounter, Khloe and Kourtney turn to find a group of new friends at the winery. (ANI)