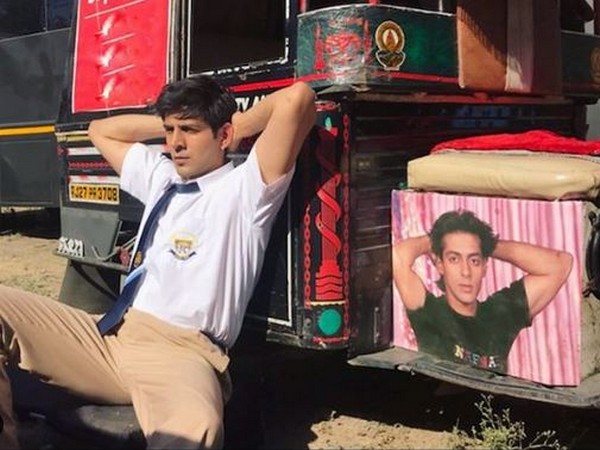 New Delhi [India], Jan 21 (ANI): Kartik Aaryan shared an adorable throwback picture from the sets of his upcoming romantic-drama 'Love Aaj Kal' as he introduced to his character Raghu striking a pose to mimic Salman Khan from one of his 90's flicks.

The 29-year-old actor hopped on to Instagram and shared the picture of his character in the movie. He captioned the picture as "Maine Bhi Pyaar Kiya [?]Meet my other half #Raghu #Kal #1990 #LoveAajkal."

In the picture, Kartik is seen dressed in a school uniform with a white shirt, beige coloured trousers, and blue tie. His clean-shaven look added to the innocence of the character. The picture also has a Salman Khan connection as it captures Kartik posing like Salman with the 'Wanted' star's picture from the 1990s in the background.

'Love Aaj Kal' is the much-awaited sequel to Imtiaz Ali's 2009 release of the same name which featured Saif Ali Khan and Deepika Padukone in the lead.
The movie will feature Sara Ali Khan alongside Kartik Aaryan in the lead role.

Directed by Imtiaz Ali, the movie also features Randeep Hooda and Arushi Sharma in significant roles.
The movie, which is set to release on February 14, 2020, presents Kartik and Sara as Veer and Zoe. (ANI)
ADVERTISEMENT