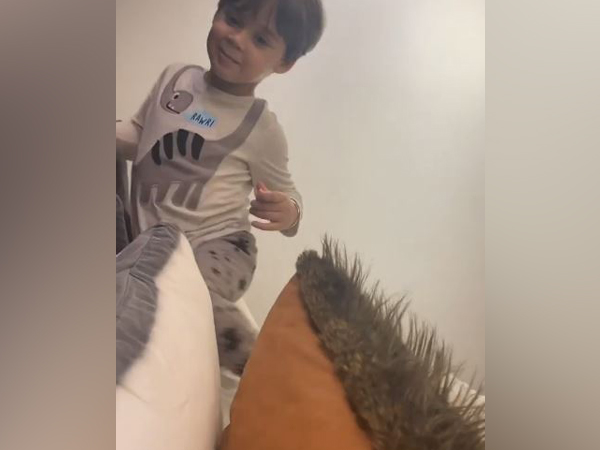 Maharashtra (Mumbai) [India], May 18 (ANI): Filmmaker Karan Johar on Monday shared yet another adorable video in which his little munchkin Yash calls the filmmaker by his new nickname 'Monkey.'

The 47-year-old filmmaker put out the video on Instagram where tiny tot Roohi is seen playing with a pink balloon on Karan's bed. The 'Kuch Kuch Hota Hai' director asks: "Roohi, what you are doing?"
To which she responds, "I want to stay in Dadda's bed only and play."
Karan repeats her words and says okay, after which he sees Yash jumping and trying to climb up the bed.
He asks Roohi, "And what about the little monkey who is trying to jump up to the bed, behind You ?"
The toddler looks back at her brother and says: "He is not a monkey. He is only Yash."
The 'My Name Is Khan' director then asks Yash: "Are you a monkey?"
The toddler twin Yash responds, "No I am Yash Bhaiya."
KJo then asks his little ones: "If he is Yash Bhaiya, then what is Roohi?"
Roohi replies, "I am Roohi Didi."
Eager to know his own nickname, he asks them, "If he is Yash Bhaiya and you are Roohi didi, and who am I?"
The toddler jumping up the bed, while smiling innocently says: "Monkey," only to leave Karan in splits.
Tasking to the captions, the 'Student of the Year' director captioned the post as, "Ok I have a new name now! #lockdownwiththejohars." Along with 3 emojis of monkeys.
The adorable video on the photo-sharing platform garnered more than 61k views within just 14 minutes of being posted.
Lately, the 'Ae Dil Hai Mushkil' director is quite active on social media amid the coronavirus lockdown and has been updating his fans on his activities with his 'Lockdown with the Johars' series.
Earlier, Karan had shared another glimpse from 'Lockdown with the Johars' in which the filmmaker's little munchkin Yash suggested his father a unique way of cutting hair -- by taking medicines. (ANI)
ADVERTISEMENT