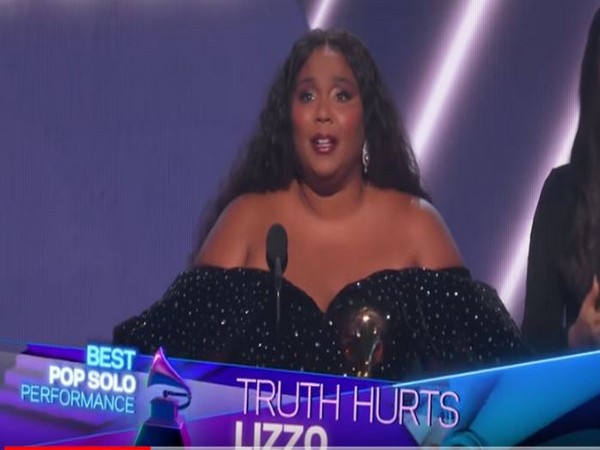 Washington D.C [USA], Jan 27 (ANI): Singer, Rapper Lizzo not only was ruling the nomination list of the 62nd Annual Grammy awards with a total of eight nods, but has stole the limelight after kick starting the show with a stellar performance and now with another win- Best Pop Solo Performance.

The most nominated artist at this year's biggest musical gala event, grabbed her third Grammy of the night for best pop solo performance (Truth Hurts).
The win came minutes after she performed to two of her hits, 'Cuz I Love You' and 'Truth Hurts', which have also been nominated in other categories.
"Thank you to the academy, first of all -- this is unexpected, really, cool, but I want to say, this whole week, I could be lost in my problems, stressed out, and then in an instant, all of that can go away and your priorities really shift," she said.
Lizzo began her acceptance speech by thanking the academy and went on to explain how important music, the healing power of music holds.
She stated: "Making music that moves people... that liberates people."
The 31 year old singer/rapper followed the speech by giving out her sincere thanks to her fellow mates and the team members.
Lizzo already marked her win at the Grammys in the categories of best traditional R&B performance for her song 'Jerome', as well as best urban contemporary album for 2019's 'Cuz I Love You'. (ANI)
ADVERTISEMENT