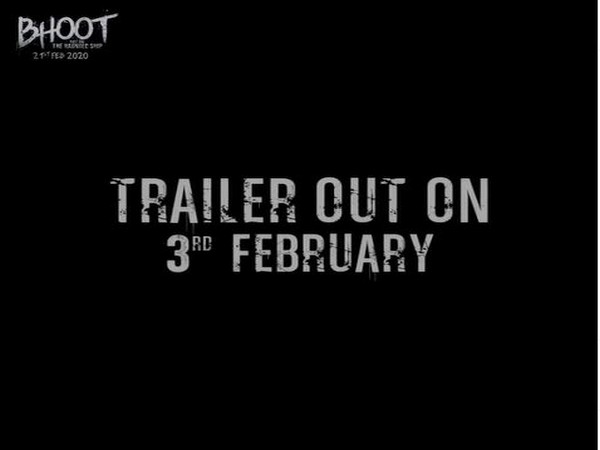 New Delhi [India], Feb 2 (ANI): Ahead of the trailer release of much-anticipated Vicky Kaushal starrer horror flick 'Bhoot Part 1: The Haunted Ship', the makers shared another terrifying teaser of the film on Sunday.

Dharma Movies shared the gripping teaser of the horror film in an Instagram post that reads, "Adjust yourself to the darkness...that's what lies ahead. #BhootTrailer OUT TOMORROW!#TheHauntedShip#Bhoot @karanjohar @apoorva1972 @vickykaushal09 @bhumipednekar @bhanu.singh.91 @ShashankKhaitan @somenmishra @zeestudiosofficial @zeemusiccompany."
In the enthralling video featuring Vicky Kaushal where he is seen entering a dark abandoned ship holding a torch in his hand where he comes across a wall with blood-stained hands. Eventually, Vicky is seen pulled away by some hands in the dark by the terrifying teaser of the flick.
The trailer for the flick will be released on February 3.
'Bhoot Part 1: The Haunted Ship' is a part of the horror franchise that revolves around a ship that lies static on a beach.
Produced by Karan Johar, the horror-thriller flick also features Bhumi Pednekar and Ashutosh Rana in lead roles in the film. The movie is slated to hit the theatres on February 21, 2020, and will clash with Ayushmann Khurrana-starrer 'Shubh Mangal Zyada Saavdhaan'. (ANI)
ADVERTISEMENT