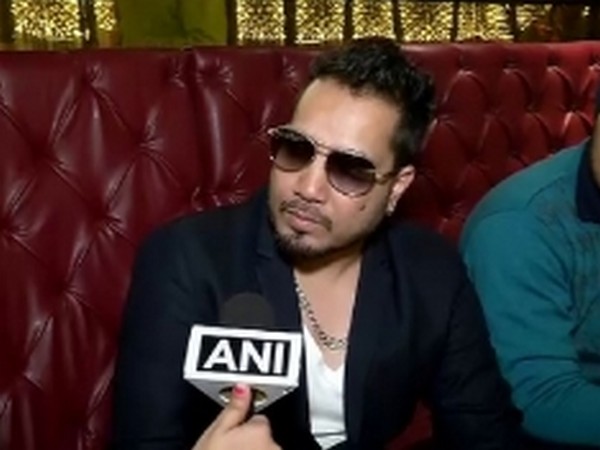 New Delhi (India), Aug 15 (ANI): Joining the bandwagon of Bollywood celebrities who are expressing their love for the country on the 73rd Independence day, singer Mika Singh too extended his heartfelt wishes on the special occasion.
After the abrogation of article 370 and separation of Jammu and Kashmir into two separate union territories -- Ladakh and Jammu and Kashmir, Mika in a tweet said that for the "first time the nation would be celebrating Independence Day from Kashmir to Kanyakumari."

The 'Mauja Hi Mauja' singer took to his Twitter and wrote, "Happy Independence Day. This is the 1st time it's happened that we are celebrating from Kashmir to Kanyakumari. Thanxx to @narendramodi for such a wonderful Independence Day. Jaihind."
When the chips are really down, one thing you cannot afford is the foot-in-mouth disease. India has been celebrating Independence Day since 1947 and Kashmir has been a part of the celebrations since then. 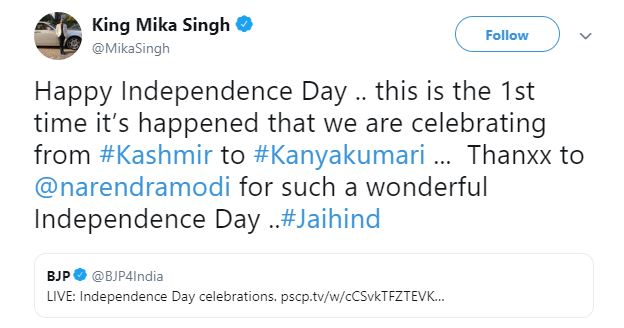 The tweet came two days after it was reported that the singer was banned from performing in Pakistan.
Last week, the Federation of Western India Cine Employees (FWICE) imposed a total ban on Mika and crew members from any performance in India for performing at an event in Karachi, Pakistan.
The event in Pakistan was organised by former Pakistani president Pervez Musharraf's close relative.
The film body put a total ban on the singer and boycotted him from recording, playback singing, and acting with the entertainment companies.
"Anybody dealing with Mika Singh alias Amrik Singh will do at their own risk, and will be boycotted."
"We are deeply pained and anguished by the performance of singer, Mika Singh alias Amrik Singh at the wedding of former President of Pakistan Pervez Musharraf's cousin's daughter in Karachi, followed by height of tension and broken relations between India and Pakistan, which is shocking, shameful and shattering," the statement read.
"Since the cultural bridge between India and Pakistan is under siege, his performance sent shivers down the spine of every Indian. Mika Singh's unbridled greed for money over the nation indicates a total non-application of mind and smacks of roguish, malafide and traumatic intentions," the statement added.
Another body, All India Cine Workers Association (AICWA) also banned the singer from the Indian film industry on Tuesday.
"AICWA takes a stand of boycotting all his association with movie production houses, music companies, and online music content providers," AICWA President Suresh Shyamlal Gupta stated in a statement on Tuesday.
The film body further put an unconditional ban on the singer and boycotted him from all the movies and music contracts with the entertainment companies.
"AICWA will make sure that no one in India works with Mika Singh and if anyone does, they will face legal consequences in the court of law. When the tension between the countries is at the peak, Mika Singh puts money above the nation's pride," the film association said.
The association also sought the intervention of Information and Broadcasting ministry in the matter. (ANI)