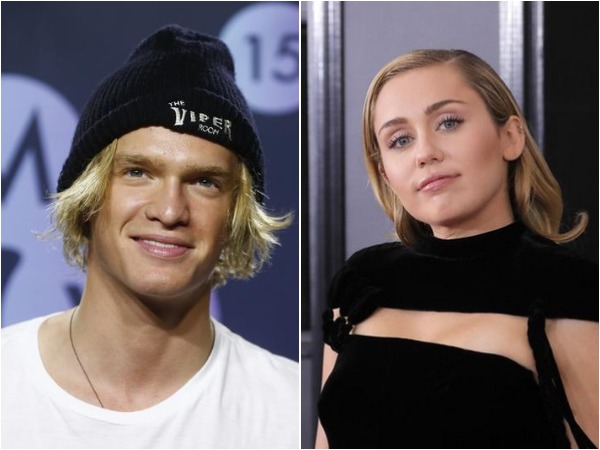 Washington DC [USA], Oct 6 (ANI): Imagine how lucky would you feel if you get to date your crush? Seems like musician Cody Simpson is living his dream.

Miley Cyrus and Simpson's romance may be new, but the star's feelings towards the pop star are certainly not, reported People.
In a recently unearthed video from February 2012, Simpson told Fuse that Cyrus "has always been my childhood celebrity crush."
"I knew all the words to her songs, I'm not gonna lie. I'm not ashamed about it, at all," Simpson said at that time.
"I was a big Miley Cyrus fan. I think she will be, forever, the most datable Disney star," he added.
And now Simpson is getting to date his childhood crush. On Thursday, he and Cyrus, who are long-time friends, were spotted kissing at Backyard Bowls in West Hollywood, sparking romance rumours which Cyrus soon confirmed on social media.
"Can a girl not get a f--ing acai bowl and a morning make out session in peace?!?!" she joked in a post clapping back at people who say she's moved on too fast following back-to-back breakups from recent exes Liam Hemsworth and Kaitlynn Carter.
Sharing a shirtless photo of Simpson, Cyrus addressed their public PD. "22 [check] Australian (my type) [check] Abs [check]," she captioned her beau's still.
And just like Cyrus, Simpson too didn't shy away from acknowledging his feelings. He addressed the recent romance rumours on Saturday, sharing a snap with Cyrus on his own Instagram Story.
In the black-and-white still, the 22-year-old musician leans in to give Cyrus a kiss on her forehead and affectionately refers to her as "baby."
"Pre swim breakfast courtesy of baby," he wrote alongside the selfie, before sharing a photo of the meal, which consisted of two pieces of banana-covered toast and what appeared to be a smoothie.
Cyrus and Simpson's romance came just a few weeks after she parted ways with Carter. The two were first linked together when they were caught making out while vacationing with Cyrus' sister, Brandi, in Italy shortly after Carter's split with Brody Jenner.
Before being with Simpson and Carter, Cyrus tied the knot with her longtime love, Hemsworth, in December 2018. The couple announced their split on August 10. Hemsworth officially filed for divorce on August 21. (ANI)
ADVERTISEMENT