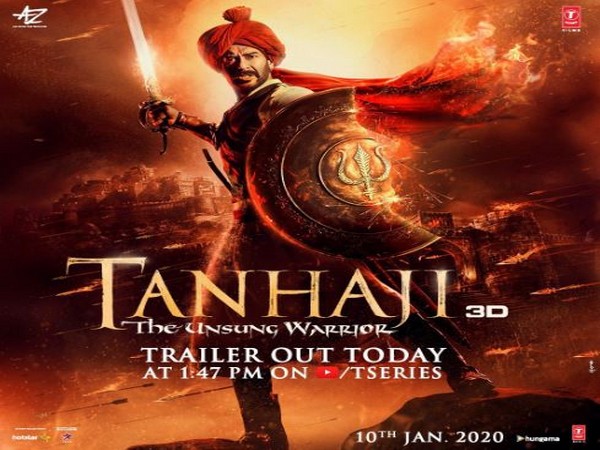 New Delhi [India], Nov 20 (ANI): Maharashtra Navnirman Sena (MNS) is supporting the release of Ajay Devgn-starrer 'Tanhaji: The Unsung Warrior', a film based on the life of a legendary military leader in the Maratha empire -- Tanaji Malusare.

The Indian political party, known for opposing the release of Hindi films dubbed in Marathi, approved the Om Raut directorial saying the film "should be dubbed in as many languages as possible."
"MNS continues to oppose the release of Hindi films dubbed in Marathi. However 'Tanhaji 'is a film that should be dubbed in as many languages as possible and released across the globe," said the president of MNS' Cine Wing Ameya Vinod Khopkar.
Lauding the film, Khopkar added, "The world must witness the legendary bravery of our Chhatrapati Shivaji Maharaj and his fearless Mavlas."
He also congratulated the director and the lead actor of the film starring Kajol as Savitribai Malusare.
The 50-year-old actor extended his hearty gratitude taking to Twitter.
"Thank you Ameya & MNS for allowing us to showcase our film Tanhaji in Marathi & Hindi simultaneously. It's our privilege to be able to share the story of this brave Maratha warrior in his mother tongue as well as the National Language," tweeted Ajay.
The movie also features Neha Sharma, Jagapathi Babu and Pankaj Tripathi in the lead roles. The 3D movie is set to release on January 10, 2020. (ANI)
ADVERTISEMENT