New gripping 'Shikara' poster is out 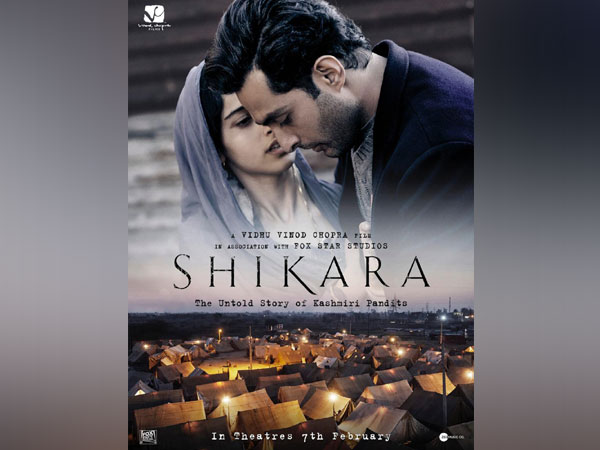 New Delhi [India], Jan 25 (ANI): The makers of the upcoming historical-drama -- Shikara -- unveiled another intriguing poster on Saturday, which is sure to stick to the sensibilities of one and all.

The poster features two lead actors Aadil Khan and Sadia, right above the sight of a refugee camp.
The poster tells the untold story of Kashmiri Pandits. Aadil Khan will be playing the character Shiv Kumar Dhar, who is a Kashmiri Pandit, while Sadia will be seen essaying the role of his wife.
The official trailer of the movie showed a series of events faced by the couple and the rest of the state people during the mass exodus of Kashmiri pandits from the valley and their struggle with the same.
The film that has Vidhu Vinod Chopra at the helm narrates the story of the mass exodus of Kashmiri Pandits from the Kashmir Valley and the bond between the lead actors in the worst of times.
The flick is largely shot in the valley of Kashmir and is being promoted mainly as a journey of love between the lead couple.
The flick has been produced by Vinod Chopra Productions and co-produced by Fox Star Studios. 'Shikara' is set to hit the theatres on February 7, 2020. (ANI)
ADVERTISEMENT