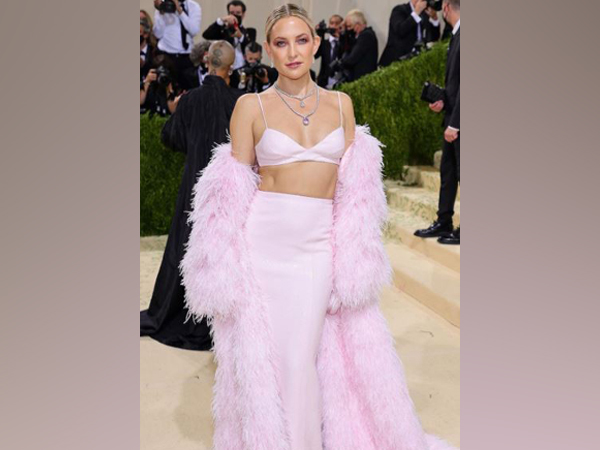 The 42-year-old actor looked stunning as she arrived at the Metropolitan Museum of Art in New York City for the extravagant event. She wore a light pink sequin bralette with a matching maxi skirt and a marvellous floor-length feathered coat by Michael Kors.
Posing in a pair of Giuseppe Zanotti heels, she rocked exquisite jewels by Lorraine Schwartz with a matching baby pink clutch.
The 'Truth Be Told' star had her hair slicked back and her makeup consisted of matching rose-coloured eyeshadow and a pale lip. Not only did the actor flaunted her toned abs at the 'In America: A Lexicon of Fashion' themed event, she also showed off her sparkling engagement ring as she headed inside.
Talking about Kate's glam to People magazine, makeup artist Quinn Murphy said, "Kate's look was inspired by her pink dress. I wanted the look to be classic 'American girl,' which Kate is and Michael does so well .... wanted to play with the pink hue, but make it deeper, so I chose cranberry."
Before arriving at the iconic gala, Kate had shared an Instagram photo with her musician boyfriend that prominently featured a new addition to her ring finger. "Let's go!" she captioned the post.
Gwyneth Paltrow, Katie Couric, Sara and Erin Foster, Zoey Deutch and several other celebs were quick to congratulate the 'Almost Famous' star in the comment section.
Kate and Fujikawa have been a couple since 2017 when they attended the premiere of 'Snatched', which starred her mother Goldie Hawn. But as per USA Today, Kate had said during CBS' 'The Talk' that they were longtime friends.
However, Sara hinted in the announcement post's comment that her friend had been keeping the news private for some time. She wrote, "Whoa. It's official. Not gonna lie, been a hard secret to keep. I may have slipped and told a few people."
The couple, who welcomed daughter Rani Rose, in October 2018, first met through the Foster sisters, who are Fujikawa's stepsisters.
This year's Met Gala was a salute to the evolution of American fashion, and organizers said it would celebrate the role of American labels in championing sustainability, diversity and inclusion.
Kate made her fashion prom debut back in 2003 when she arrived at the iconic event in a sleek white column gown designed by her longtime friend, Stella McMartney. She's since attended with McCartney many times: in 2009, 2010 and with a super-stylish baby bump in 2011. She also has previously attended with Kors, in 2015.
The last time Kate made an appearance at the Met Gala was in 2017. That year's theme was 'Rei Kawakubo/Comme des Garcons: Art of the In-Between', with the blonde beauty wearing a white Stella McCartney gown and spray painting her hair white and rocking a top knot.
This year's event was co-chaired by red carpet staple and Oscar nominee Timothee Chalamet, Grammy winner Billie Eilish, tennis pro Naomi Osaka and poet Amanda Gorman.
The Met Gala was delayed from its usual scheduled date on the first Monday in May after last year's event was cancelled due to the COVID-19 pandemic. Guests were required to provide proof of vaccination and wear masks at all times, except for when drinking and eating. (ANI)
ADVERTISEMENT