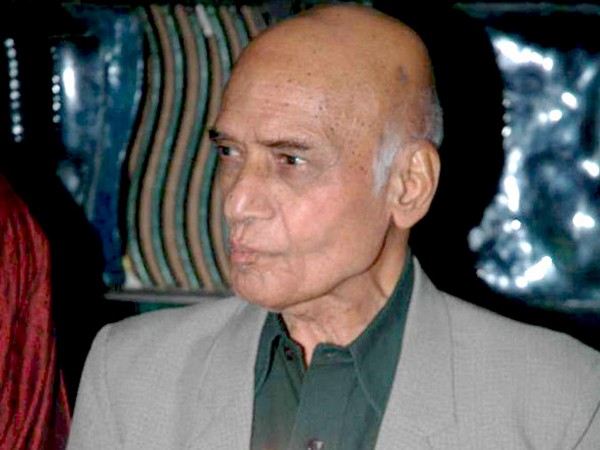 Legendary music director-composer Khayyam famed for his compositions in films like Kabhie Kabhie and Umrao Jaan breathed his last at the age of 92 on Monday at a hospital in Mumbai.

The veteran breathed his last at 9:30 pm at the intensive care unit (ICU) of Sujay Hospital in Juhu where he was in critical condition after being admitted with age-related illness a few days ago, informed Pritam Sharma, spokesperson for Khayyamji's Trust.

Tributes started to pour in as soon as news of the musician's demise came in.

"India will remain grateful to Khayyam Sahab for giving us some of the most memorable compositions, which will be remembered forever. He will also be remembered for his humanitarian gestures to support upcoming artists. His demise is extremely saddening," he tweeted. 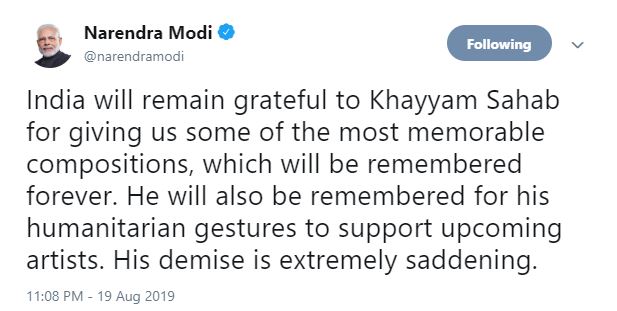 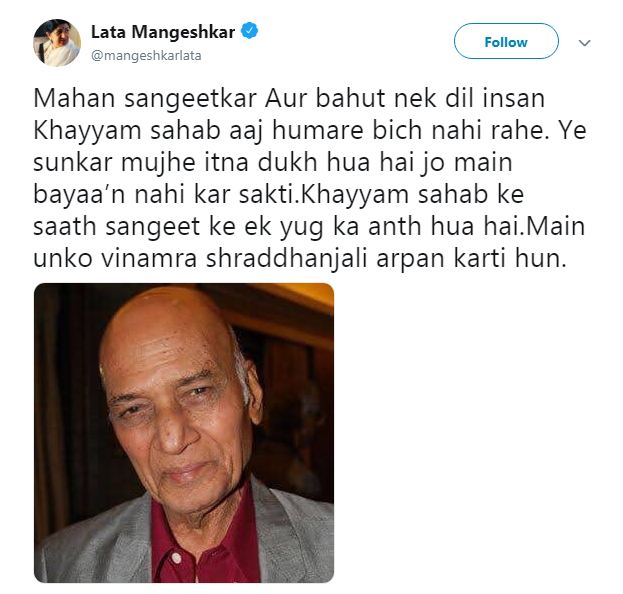 Deeply saddened by the demise of Khayyam, music composer Salim Merchant took to his Twitter and wrote, "The Legend Khayyam saab passed away this eve at 9.28 pm. What a huge loss to the Music & Film world. I was by his side all day today with @TalatAziz2 bhai & Bina Aziz. May Allah bless his Soul. Inna Lillahi wa inna ilayhi raji'un."

Mohammed Zahur 'Khayyam' Hashmi, better known as Khayyam, began his career in music from the city of Ludhiana at the tender age of 17. He got his first big break in blockbuster 'Umrao Jaan' through which he made his permanent place in Bollywood industry.

The musician was honoured with Padma Bhushan in the year 2011 and was bestowed the Sangeet Natak Akademi Award in 2007.

He won National Award, and also a Filmfare Award, besides a few other tributes for composing music for the movie which stars Rekha, Raj Babbar, and Naseeruddin Shah.

He also gave music for late Meena Kumari's album, 'I Write, I Recite' featuring 'nazms' (poems) sung by her.
ADVERTISEMENT