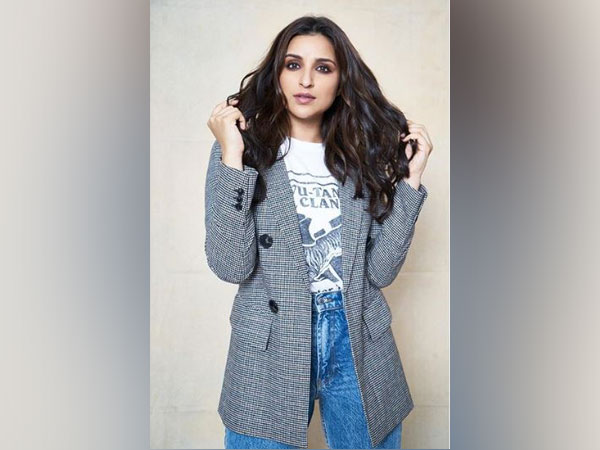 New Delhi [India], Oct 8 (ANI): Seems like Bollywood actor Parineeti Chopra is leaving no stone unturned to get into the skin of her character for her upcoming film where she will be essaying the role of ace shuttler Saina Nehwal.

Ever since the 'Meri Pyaari Bindu' actor announced that she would portray the role of the badminton player on the big screen, fans have been eagerly awaiting the film's release.
Parineeti has also been posting photographs from her training sessions and it's safe to say that the actor is certainly sweating it out on the court!
Taking to Instagram, Parineeti announced that shooting for the film will commence soon. The actor also posted a picture of herself, dressed in an orange t-shirt and black shorts, after a game of intense badminton at the Thane Badminton Academy.
"Getting there ... shoot begins SOOOON! #SainaNehwalBiopic," Parineeti captioned the post.
[{9b646347-961c-41f4-ab95-83f85815a4a7:intradmin/pari_biopiccoct8.jpg}]
Saina Nehwal too took to Instagram yesterday to share a good luck message for the actor and the entire team. Along with the special message, the badminton player also shared what appears to be the first look of Parineeti from the film.
Saina wrote, "Looking forward to this journey together! My best wishes to the team #SainaNehwalBiopic."
In the picture, Parineeti is seen dressed in sportswear.
Parineeti also shared her first look as Saina on the photo-sharing application yesterday. In the picture, we can see Saina holding a shuttlecock with Parineeti replicating the pose.
The 'Meri Pyaari Bindu' actor will begin shooting for the biopic on Friday. Producer Bhushan Kumar shared the news regarding the film's shoot. He tweeted, "All the very best Parineeti and the entire team as our project, #SainaNehwalBiopic starts shooting on 11th October."
Initially, Shraddha Kapoor was finalised for essaying the role of the ace shuttler but Parineeti was brought in later to replace the 'Saaho' actor. Shraddha had even started shooting for the film, but the filming was halted soon after the 'Ek Villain' actor was diagnosed with dengue. She quit the project later due to scheduling conflicts.
The biopic will be directed by Amole Gupte, who has earlier helmed 'Stanley Ka Dabba' and 'Hawaa Hawaai'. The film is expected to release in 2020.
Parineeti was last seen in 'Jabariya Jodi' opposite Sidharth Malhotra. The actor recently wrapped up shooting for Hindi remake of the Hollywood movie, 'The Girl On The Train'. The Hollywood film was based on the 2015 bestseller by Paula Hawkins and tells the story of a divorcee who gets entangled in a missing person's investigation that wrecks havoc in her life.
Parineeti will also appear in 'Bhuj: The Pride Of India' and 'Sandeep Aur Pinky Faraar'. (ANI)
ADVERTISEMENT