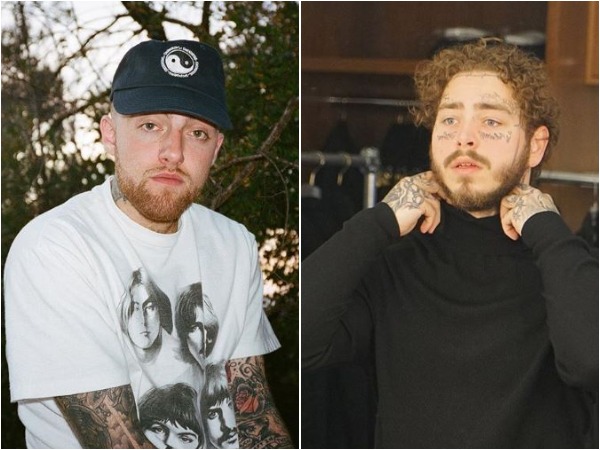 Washington D.C. [USA], Sept 8 (ANI): American rapper Post Malone recently released his third album 'Hollywood's Bleeding' and couldn't help but recall one fellow rapper who he has looked up to throughout his career, who is none other than Mac Miller.
Malone spoke to Zane Lowe of Beats 1 radio about his "super epic" latest album, which features multiple collaborations with A-list artists like Travis Scott, Meek Mill, and Ozzy Osbourne, reported People.

"I think I'm really catching a groove and just giving the best I can," the 24-year-old rapper said of the new album.
Malone was quick to bring up Miller while discussing his latest album as the late musician helped him jumpstart his career.
"Mac was the first one that tweeted me," Malone said of Miller, who passed away one year ago.
"It's so weird because I listened to him since the beginning. I was like, 'Yeah, awesome. This guy's cool as s--.' Then to be able to meet him and become friends with him was just like, 'I look up to you, and now we're sitting here playing beer pong'," he added.
The 'Sunflower' hitmaker also shared that he and Miller had discussed the idea of working on an album together before his tragic demise.
"We were sitting there playing beer pong and we were like, 'Let's make a f--ing album.' Then we were coming up with names and then it's so weird too. Because it was like a day, two days after he died," Malone said.
"We were at an Airbnb in L.A. and all of a sudden the TV turns on and it wouldn't stop. We tried disconnecting it and all this. Then we turned it off and then it came back on and I was just like, 'This is weird. It gives me chills.' I don't know," he added.
The rapper added, "What an incredible, honestly, what a genuine human being."
Malone's memory of Miller came a day after the first death anniversary of the late rapper. Miller passed away due to an accidental overdose at the age of 26 on September 7, 2018. Last November, the Los Angeles County Department of Medical Examiner-Coroner revealed Miller had fentanyl, cocaine, and alcohol in his system, noting the rapper's death was accidental and due to mixed drug toxicity.
As Malone remembered the late artist, so did Miller's family and community in his native city of Pittsburgh.
On Friday, fans and city members gathered at Blue Slide Playground to remember the beloved artist on the eve of his death, reported CBS, as cited by People.
Miller's father, Mark McCormick, spoke at the event organised by the site creators of 'The Mac Miller Memoir', to honour his son.
"I don't care if you want to be an artist, you want to be an architect, you want to be a musician, you want to be an accountant, whenever that moment happens, I think we have to go all-in on finding the thing that we love to do, that gives us joy in life," McCormick said.
McCormick added, "fentanyl-laced drugs killed my son. As I said, while many of us experimented with drugs when we were young, it's not the same world out there. It's not worth it. It's not worth the risk."
Recently, a Hollywood Hills resident, Cameron James Pettit was arrested on federal charges alleging that he provided the late rapper counterfeit pharmaceutical drugs that contained fentanyl two days prior to his overdose last September. (ANI)