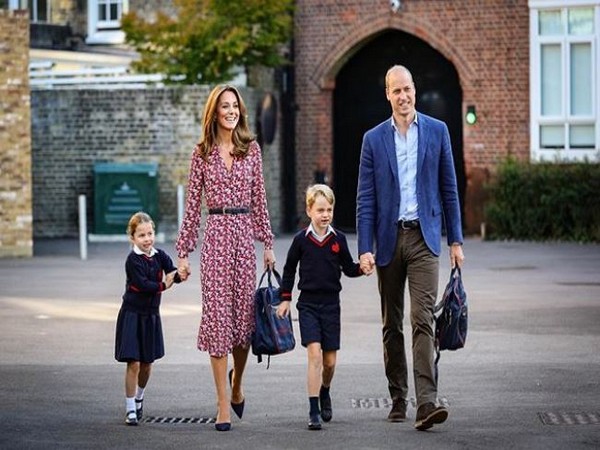 Princess Charlotte is no longer the baby Kate Middleton and Prince William welcomed and debuted to the world back in 2015. Just last week, the -4-year-old stepped out with her parents and older brother, Prince George, for their first day of school, reported People.
For eagle-eyed observers, you might have noticed an accessory on Charlotte's bag in Kate's hand: a sequin unicorn keychain, it turns out that the little munchkin loves unicorns.
During the royal's visit to Harcombe House on Monday to launch a texting service aimed at helping first responders, he met Dan Bills and his three children and spotted one of his daughters playing with a unicorn horn crafted from colourful balls.
"My daughter loves unicorns. Loves them. Very cool," the royal revealed.
Charlotte previously displayed her love for unicorns in July, when the family came out to support Prince William and Prince Harry in their charity polo match.
In a photo shared by the Irish Guards later that month to wish George a happy sixth birthday, the little princess could be seen clutching a unicorn purse.
While other members of the royal family carry high-end designer handbags, Charlotte's insanely cute purse is totally affordable and retails for less than USD 10 on Amazon. Along with being the perfect size of bag for kids, the sweet change purse also boasts colour-changing abilities thanks to the reversible sequins found on the unicorn's face.
Bills later told reporters that William was "was such a pleasant, down to earth, humble guy who made you feel comfortable. You could see he had a genuine interest in what we had experienced."
Bills and his family have been visiting the centre for the past eight years after struggling with son Joshua's autism diagnosis.
William's outing came in honour of 999 Day, an annual U.K. holiday held on the ninth hour of the ninth day of the ninth month which celebrates police, fire and emergency medical services.
"As a society, we owe our wellbeing, and indeed our lives, to the men and women in our emergency services who work tirelessly to protect us in some of the most difficult circumstances," William said in a statement shared on Instagram.
"It is only fitting that we should recognise the vital role that they play, and pay tribute to the bravery and dedication of those who have made the ultimate sacrifice for their communities," he added.
William promoted a new texting service through the Crisis Text Line during his Monday's outing. (ANI)
ADVERTISEMENT