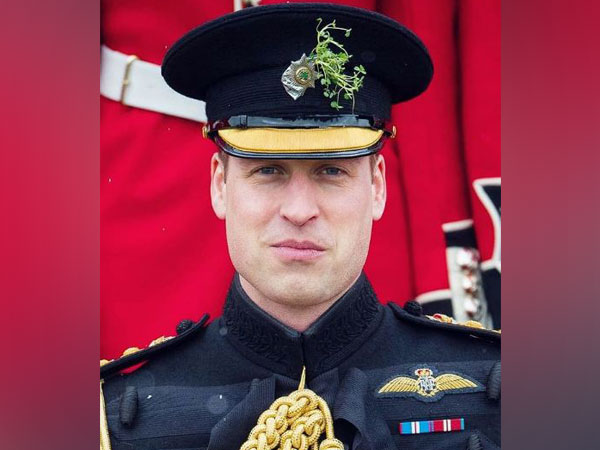 Washington [US], April 8 (ANI): The Duke of Cambridge Prince William, who is the president of the British Academy of Film and Television Arts (BAFTA) since February 2010, is set to deliver a virtual speech at the award show's ceremony on Sunday.

According to Fox News, the Duke of Cambridge is gearing up to deliver a speech celebrating the resilience of the film industry across the last year at the prestigious BAFTA award ceremony.
Not on this, William will also appear at Saturday's BAFTA event, when craft awards will be handed out, taking part in a video with three-time BAFTA award-winning costume designer Jenny Beavan, and Makeup and Hair designer Sharon Martin about filming in lockdown.
Fox News reported that recently BAFTA had also confirmed its musical acts and guest presenters for the dual events mentioning that on Saturday, supporting actor nominee Leslie Odom Jr. will appear from Los Angeles to sing 'Speak Now' from 'One Night in Miami', while on Sunday, Brit Award winner Celeste will perform 'Hear My Voice' from Best Film nominee 'The Trial of the Chicago 7'.
Additionally, there will be a duet of 'A Change is Gonna Come', featured in 'One Night in Miami' to be performed by Leslie Odom Jr. with Corinne Bailey Rae in London.
Fox News informed that awards presenters at the Royal Albert Hall on Sunday will include Asim Chaudhry, global star Priyanka Chopra Jonas, Sophie Cookson, Phoebe Dynevor, Chiwetel Ejiofor, Cynthia Erivo, Hugh Grant, Richard E. Grant, Tom Hiddleston, Felicity Jones, Gugu Mbatha-Raw, James McAvoy, David Oyelowo, Pedro Pascal and Jonathan Pryce.
Appearing from LA will be Rose Byrne, Andra Day, Anna Kendrick and Renee Zellweger.
The BAFTA nominations were announced by Aisling Bea and Susan Wokoma at the Royal Albert Hall in London.
This year's awards will take place across a whole weekend, with two separate shows airing on April 10 and 11, broadcast virtually out of London's Royal Albert Hall. The first show will focus on the craft awards and air on BBC Two, while the main performance prizes will be handed out in a BBC One broadcast on April 11. (ANI)
ADVERTISEMENT