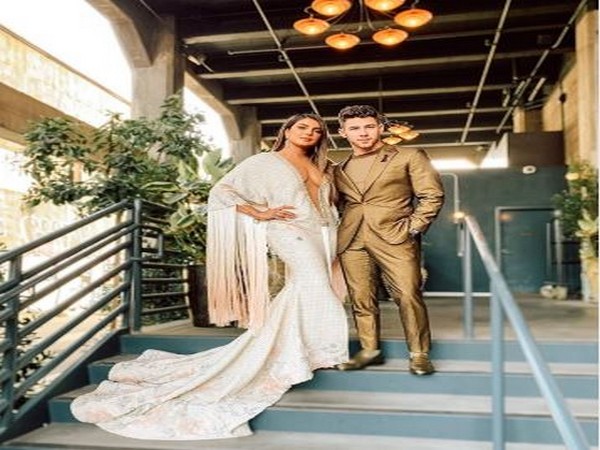 Priyanka Chopra and Nick Jonas were the cynosure of all eyes as they walked the red carpet of the 62nd edition of the Grammys at Los Angeles' Staples Centre.

The Sky is Pink actor sizzled in an embellished Ralph & Russo gown with a neckline that plunged well below her belly button similar to what Jennifer Lopez's Versace green gown from 2000. She also wore a crystal stud on her belly button.

Both Priyanka and Nick wore their tributes to basketball star Kobe Bryant through their outfits. While the former flaunted '24', Bryant's jersey number on one of her fingernails, Jonas wore a purple ribbon on the lapel of his suit.

Bryant, who played for Los Angeles Lakers was killed in a helicopter crash shortly before the Grammys show.

The 37-year-old actor's off white loose-fitting gown had crystal embellishment and long fringe on her sleeves. Priyanka topped it off with long chandelier earrings. Over all a sparkling outfit.

This is the power couple's second award season appearance as in January they were presenters at the Golden Globes.

Kevin and Joe opted for outfits with prints on it, one in the shade of blue while the other had a black-cream undertone.

All three Jonas Brothers Nick, Joe and Kevin nominated for their song Sucker for the best pop duo/ group performance were joined by their wives at Hollywood's biggest musical gala event.

The boy band turned the fashion game on to the point and so did their wives, popularly known as J Sisters- Priyanka Chopra Jonas, Sophie Turner and Danielle Jonas.

Ever since the nomination for the Grammys was announced, The Sky is Pink actor turned out to be the biggest cheerleader for the boyband.

While the winners list were revealed one after the other, Jonas brothers took to the stage and regaled the audience with their solo their latest single, What A Man Gotta Do.