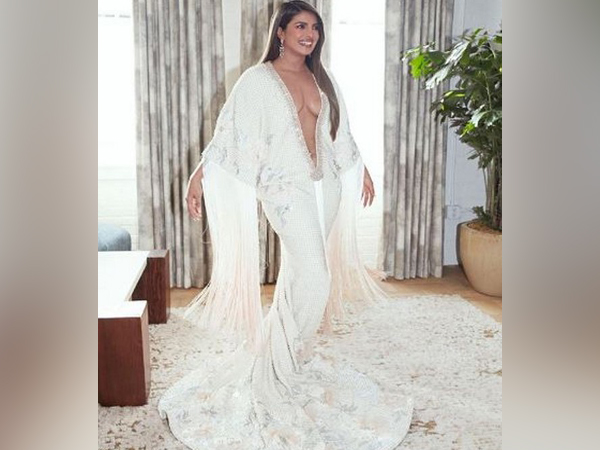 Washington D.C. [USA], Jan 31 (ANI): Priyanka Chopra Jonas looked stunning at the 62nd annual Grammy Awards, where she was seen flaunting Ralph & Russo gown that plunged as low as Jennifer Lopez's Versace dress did in 2000. The star got candid about the iconic red carpet fashion moment including how she managed to avoid a wardrobe malfunction with a dress so low-cut.

According to Us Weekly, the 37-year-old star revealed that the key was a piece of fabric that was practically invisible. The actor shared that whenever Ralph & Russo, make couture or custom outfits for her, "they always do them fitted to my body, keeping these things" -- wardrobe malfunctions -- "in mind."
She continued: "So as much as people might think it would be hard to manage, they found this incredible tulle the same colour as my skin tone and sort of held the dress together with that. So you can't even see it in the pictures but there was no way it would have happened if they didn't have that. It was like a netting."
The 'The Sky is Pink' actor also made it clear that she won't take a fashion risk for an awards show. She also stated that in fact, the dress needs to be glued to her body. The star explained that "When I decide to wear an outfit I'm not someone who's really nervous because when I walk out of the door, I'm very secure," explained Chopra. "I don't leave unless I'm super secure."
The actor laughingly added, "I don't like wardrobe malfunction! Nobody does!"
The other best thing about the awards season is that the internet is flooded with pictures of the entire Jonas family, including Priyanka's sisters-in-law Sophie and Danielle.
The 'Baywatch' actor also gave the tit-bits of her group chat with her fellow Jonas wives and revealed that they text each other outfit details on awards show days. She stated that we send each other pictures of what we are going to be wearing before and this was not for comparison but they ask each other, "What do you think about this?"
The star also shared that, "We're all as a family very individual in our choices and we're also women who don't let fashion dictate us, really, "So it's just for fun, we're all really tight and we're close." She also stated that it's just for fun and disclosed that "we're all really tight and we're close -- it's not stressful."
Chopra will be hosting a European-style festival celebrating music, style, and food- the Stella Artois Port de Stella in Miami, which is one of her upcoming gigs. (ANI)
ADVERTISEMENT