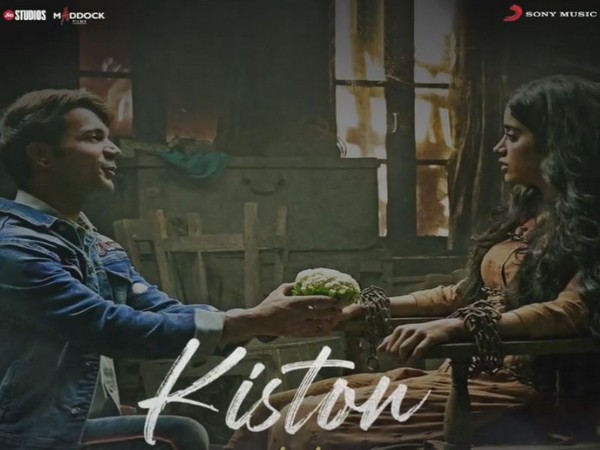 New Delhi [India], February 26 (ANI): After the raging success of the first song 'Panghat' from the Rajkummar Rao and Janhvi Kapoor-starrer 'Roohi', a second song titled 'Kiston' has been released, which follows the lead pair's love story and how it develops under spooky circumstances.

Janhvi took to her Instagram handle on Friday and shared a teaser of the romantic ballad for her fans. She captioned the post as, "#Kiston, out now Link in bio. #Roohi in cinemas 11th March, 2021."

The song begins with Rajkummar going down on his knees with a cauliflower in front of Janhvi which sets the perfect mood for the song. The romantic track is then followed by little gestures of Rajkummar for Janhvi, as we see him clicking her pictures, or admiring her when she is asleep.
Sung by Jubin Nautiyal, the heart-touching lyrics of the song have been penned by Amitabh Bhattacharya with the music composed by Sachin-Jigar.
'Roohi' which was previously called 'Rooh Afza' and then 'Roohi Afzana', is a horror-comedy directed by Hardik Mehta. A Jio Studios Presentation, 'Roohi' is being produced by Dinesh Vijan and Mrighdeep Singh Lamba. It also stars Varun Sharma in the lead role.
The film marks the first-ever collaboration of Rajkummar and Janhvi. Rajkummar and Varun have earlier shared screen space in the 2015 release 'Dolly Ki Doli'.
'Roohi', which is the first major Bollywood release post lockdown, was set to hit the cinemas in the first week of June last year, but the film had to be postponed due to the ongoing coronavirus pandemic.
The upcoming horror-comedy will also become the first film to arrive in theatres after the Ministry of Information and Broadcasting allowed cinema halls nationwide to operate at full capacity from February 1 with COVID-19 safety protocols put in place.
The film is set to hit the theatres on March 11, this year, and is based on the lines of the 2018 hit film 'Stree', which featured Shraddha Kapoor and Rajkummar Rao in lead roles. (ANI)
ADVERTISEMENT