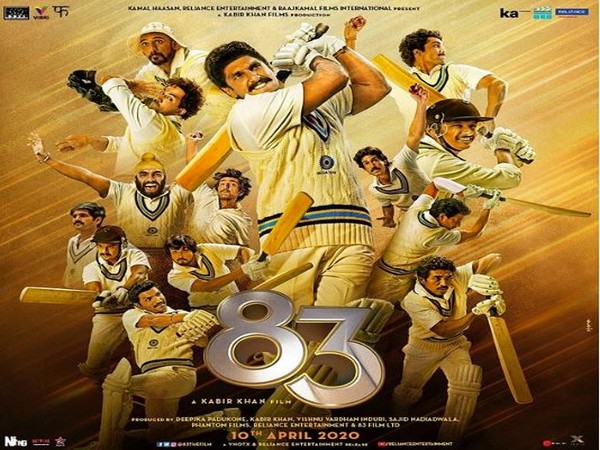 New Delhi [India], Jan 25 (ANI): Ranveer Singh on Saturday unveiled the much-anticipated teaser of the sports-drama -- 83 -- along with the poster at an event in Chennai on Saturday.

The 34-year-old actor hopped on to Instagram and shared the teaser of the film featuring the lead characters and wrote, "#ThisIs83" in which he tagged the entire lead characters of the flick.


The teaser gives the glance of the lead characters of the flick featuring Tahir Raj Bhasin as Sunil Gavaskar, Jiiva as K Srikkanth, Saqib Saleem as Mohinder Amarnath, Jatin Sarna as Yashpal Sharma, Chirag Patil as Sandeep Patil, Dinker Sharma as Kirti Azad and Nishant Dahiya as Roger Binny, Harrdy Sandhu as Madan Lal, Sahil Khattar as Syed Kirmani, Ammy Virk as Balwinder Singh Sandhu and Addinath M Kothare as Dilip Vengsarkar, Dhairya Karwa as Ravi Shashtri and R Badree as Sunil Valson along with Pankaj Tripathi as PR Man Singh.
The 'Padmaavat' actor also shared an intriguing poster of the flick, which featured the lead characters along with Ranveer Singh from their respective character posters from '83'. 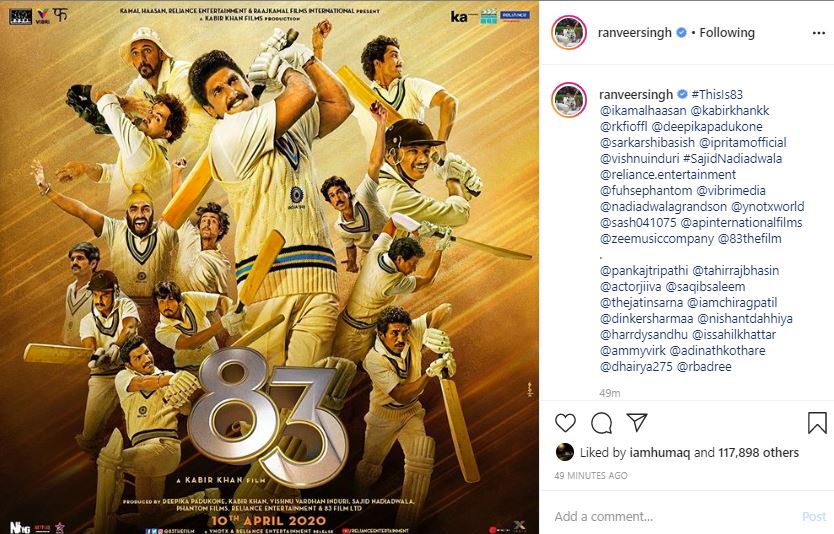 The sports-drama also stars Deepika Padukone in the lead role opposite Ranveer Singh, who will be portraying the role of legendary all-rounder cricketer Kapil Dev.
The movie is being co-produced by Madhu Mantena, Sajid Nadiadwala, and Reliance Entertainment. Helmed by Kabir Khan, the movie is slated for release on April 10. (ANI)