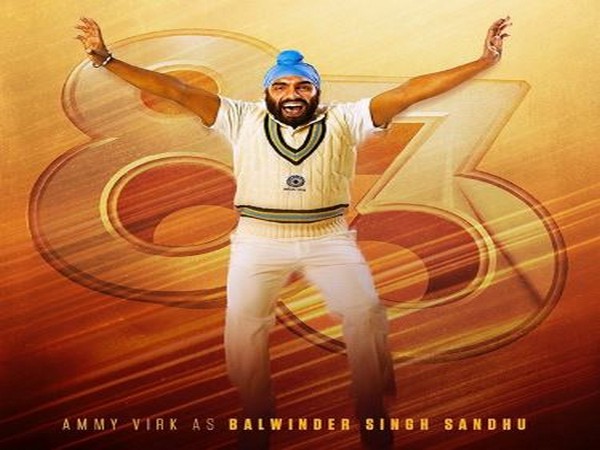 Balwinder, who is considered a medium pace bowler and an efficient batsman during Kapil Dev's time, completes the team members in the series of posters that were being unveiled in the last 9 days.
In the poster, Ammy is seen throwing his arms up in joy. The actor is seen donning the Indian cricket team's jersey, with a 'kadha' visible on his right arm.
Ranveer captioned the post as, "*Cue track* It's the SWINGIN' SARDARJI !!! Presenting @ammyvirk AMMY VIRK as BALVINDER SINGH SANDHU!!! @inswingsandhu PS- this one is special to me as our Dil Da Raja Amrinder portrays the role of our beloved coach SANDHU SIR because of whom we have all become better cricketers."
He continued, "What an honour to be coached for the film by the World Cup Winner Himself #LoveYouSandhuSir PPS- both are real characters, On and Off screen I think all my 'PROFASHNULS' will agree"
Earlier on Sunday the lead actor introduced the ninth player by sharing the character poster featuring Sahil Khattar as Syed Kirmani.
The movie also features Deepika Padukone who will be seen playing the on-screen better half of Kapil Dev in the sports biopic. The movie is set to release on April 10 this year. (ANI)
ADVERTISEMENT