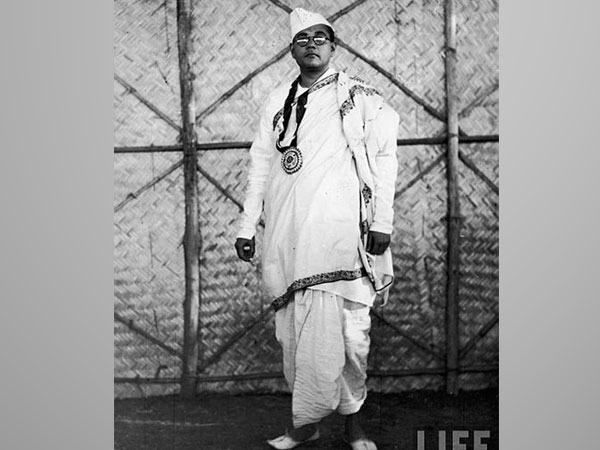 New Delhi [India], Jan 23 (ANI): Since 1966 Subhas Chandra Bose has been a point of interest for many filmmakers across the country. His heroic life, philosophy, bravery and mystery around his death have given birth to many cinematic representations over the years.

Today being Bose's 123rd birth anniversary, we look back at some of the notable audio-visual depictions around his life and Indian National Army (founded by Bose).
Samadhi (1950)
The film does not directly revolve around Subhas' life but around one of his INA soldier's life and struggle to give up the love of his life and sister for the sake of his country. Directed by Ramesh Saigal, the film portrays the struggle of freedom fighters and Subhas Chandra Bose's ideologies and political views.
Subhas Chandra (1966)
The Bengali film by Piyush Bose allows a brief peek into the freedom fighter's life. It presents the bloom of a freedom fighter inside the kid Subhas. His character shift, patriotism and noble intentions for his country blossom slowly but steadily since his childhood days.
Netaji Subhas Chandra Bose: The Forgotten Hero (2004)
The 2004 war film focused on Bose's disagreement with Mahatma Gandhi and his escapade act to Germany. Helmed by notable filmmaker Shyam Benegal, the biopic cast Sachin Khedekar as Netaji. Other important characters were played by Jisshu Sengupta (as Sisir Bose), Kulbhusan Kharbanda(as Uttamchand Malhotra), Divya Dutta (as Ila Bose) amongst others.
Ami Subhash Bolchi (2011)
In this fictional piece, Subhas plays a pivotal role in a Bengali layman's life. Debabrata Bose (Mithun Chakraborty) fights for his mother tongue and motherland. Subhas through Debabrata's own conscience motivates and rejuvenates the will to fight for his motherland.
Bose: Dead/Alive (2017)
The nine-part television series also delves into the theories around Netaji Subhas Chandra Bose's mysterious death circumstances. Directed by Ekta Kapoor, the series is starred by Rajkumar Rao (as Subhas Chandra Bose).
Gumnami (2019)
The recently released Bengali film talks about the possibility of Gumnami Baba being Netaji Subhas Chandra Bose himself. The film depicts Mukherjee Commission Hearings where Chandrachur Dhar (Anirban Chatterjee) talks about three theories of what must have happened to Netaji Subhas Chandra Bose.
The Forgotten Army (2020)
Initially released in 1999, Kabir Khan's six-episode documentary is ready to take the OTT by surprise with representing lesser-known facts and struggles by Bose's Indian National Army soldiers. (ANI)
ADVERTISEMENT