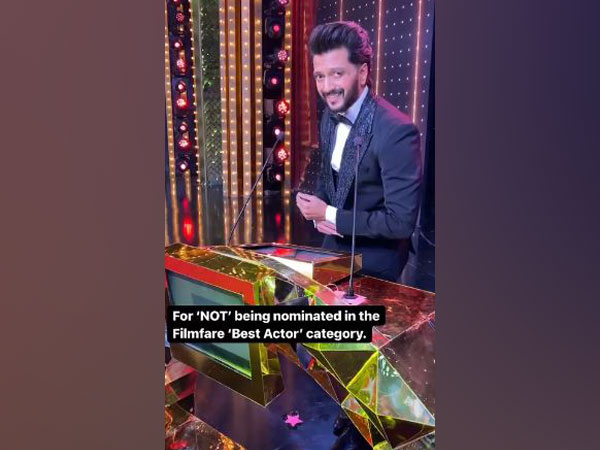 Mumbai (Maharashtra) [India], April 8 (ANI): Bollywood actor Riteish Deshmukh, who has been treating fans with his rib-tickling posts, keeping up with the trend, on Thursday posted a rib-tickling video in which he was seen delivering an acceptance speech for 'NOT' being nominated in the 'Best Actor' category of Filmfare Awards.

The 'Ek Villain' star took to Instagram and put out a video in which he is seen all suited up on the stage. The video sees Riteish dressed in a tuxedo and the actor looks handsome as he delivers the 'acceptance speech.' 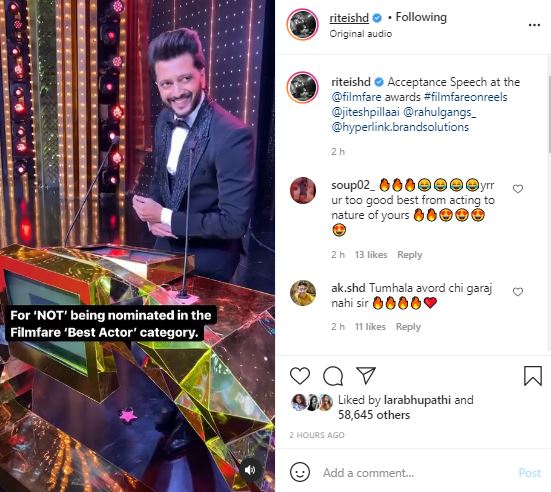 In the video, he says, "Last but not least, I wanna thank me! I wanna thank me for believing in me!!!" He delivers the speech as he smiles and winks into the camera.
It seems like the actor took a dig at not being nominated in the 'Best Actor Category' for Filmfare Awards and took it in a fun spirit.
Taking to the caption, the 'Masti' actor wrote, "Acceptance speech on the Filmfare Awards".
Celebrity followers, including Lara Dutta Bhupathi and more than 58 thousand fans, liked the post within an hour of being posted.
Scores of fans chimed into the comments section and left laughing with teary eyes emoticons, as they liked the light-hearted video post by Riteish. They left red heart and laughing emoticons as they loved the post. (ANI)
ADVERTISEMENT