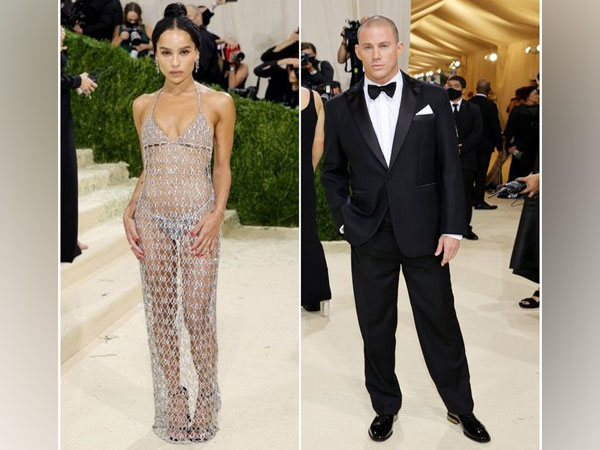 Washington [US], September 14 (ANI): Rumoured star couple Channing Tatum and Zoe Kravitz arrived separately at the Met Gala 2021, despite being spotted together frequently in NYC over the past few months.

Tatum arrived at fashion's biggest night first, looking dapper, wearing a standard black tuxedo with patent shoes and a white handkerchief in his pocket, reported People magazine.
Not to be outdone, Kravitz arrived at the star-studded Metropolitan Museum of Art's Costume Institute Gala looking glam in slicked-back hair, wearing a sheer, see-through crystal Saint Laurent by Anthony Vaccarello slip dress with a matching silver thong underneath, leaving her backside totally exposed.
Unlike Tatum, Lenny Kravitz and Lisa Bonet's only daughter has been a guest at the prestigious event several times before, including in 2010, 2014, 2015, 2016, 2017, 2018, and 2019. Perhaps Tatum got his invite this year as Kravitz's inconspicuous plus one. He attended the event once back in 2007 for the 'Poiret: King of Fashion' exhibition.
The stunning pair is yet to attend a Hollywood event together as a couple since sparking dating rumours earlier this year. However, that doesn't mean they haven't been spending a lot of time together out in public recently.
Earlier this month, a source had told People magazine that Tatum and Kravitz "continue to be inseparable" in N.Y.C. where they have been spotted enjoying low-key activities, like grabbing lunch, drinking iced coffee, and bike riding together. "They looked very happy. They have this cute and flirty chemistry."
As per Page Six, most recently, both of them were spotted on a lunch date in Brooklyn, in which he wore a rouge-coloured button-down shirt, white tank top and black jeans and she matched him in a red shirt and denim shorts.
In January, the rumoured couple had dismissed dating rumours that started circulating online just days after the Kravitz filed for divorce from her husband, Karl Glusman.
At the time, Tatum was already single as he and his on-again, off-again girlfriend Jessie J's split confirmed their split in October 2020. He was previously married to actor Jenna Dewan for 10 years, and they share a daughter. Their divorce was finalised in November 2019.
Personal representatives for the actors have not yet commented on their relationship, but sources have told People magazine, the rumoured couple shares a lot in common. "Zoe thinks Channing has depth both as an actor and a person," shared an industry source.
Kravitz and Tatum reportedly met on the set of 'Pussy Island', a thriller film in which she is making her directorial debut and he plays the lead.
While they are yet to officially make their red carpet debut as a couple, all eyes had been expecting the duo to make their appearance together at the 2021 Met Gala. (ANI)
ADVERTISEMENT