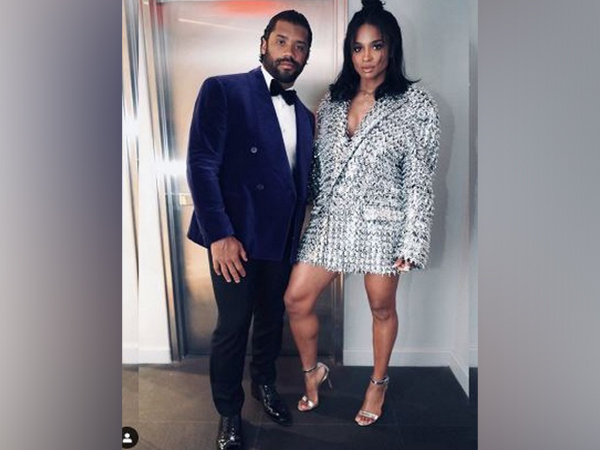 Washington D.C. [USA], Feb 2 (ANI): Russell Wilson shared how he likes pampering pregnant wife, Ciara, who's expecting their second child.
The 31-year-old Seattle Seahawks quarterback married the singer four years back. Wilson revealed to Us Weekly on Saturday, "It's really exciting" to be welcoming another member in their family. Russel and Ciara have a 2-year-old daughter Sienna, and Ciara has a son, Future, 5.

"We're really fired up about having a third baby," Wilson said. "We hoped that we were having a new baby. It's a blessing for sure."
The NFL star was in Miami for the Super Bowl and said that his kids enjoyed watching the game.
"They love it," Wilson, who is a co-owner and chairman of NFL Flag, let out, adding, "Sienna gets excited every time. She's like, 'football game, football game.' And then Future, he's the same way. He gets fired up. He loves playing. He plays [flag football] already."
Ciara and her husband announced that they were expecting on Thursday, January 30, with the "Love Sex Magic" singer posting a photo of herself on Instagram wearing a bikini and showing off her growing baby bump as she posed on rocks at the beach. "Number 3," she simply captioned the pic.
With one of each at home, the athlete told Us he isn't hoping for a boy or a girl, just "a healthy baby, you know, that's all that matters."
For now, he's focused on making sure that the "Thinkin Bout You" singer is spoiled.
"I always pamper, pregnant or not," Wilson told Us. "I just make sure that all of her food cravings are taken care of, that she gets anything she wants."
'America's Most Musical Family' judge raved about her kids in an interview with PureWow in November, saying, "Motherhood has just shown me there's really nothing we can't do as women. I feel really empowered having my kids in my life. By far, my greatest accomplishment is having them. ... I can't even imagine my life without them. Life without them was not as good as it is with them." (ANI)
ADVERTISEMENT