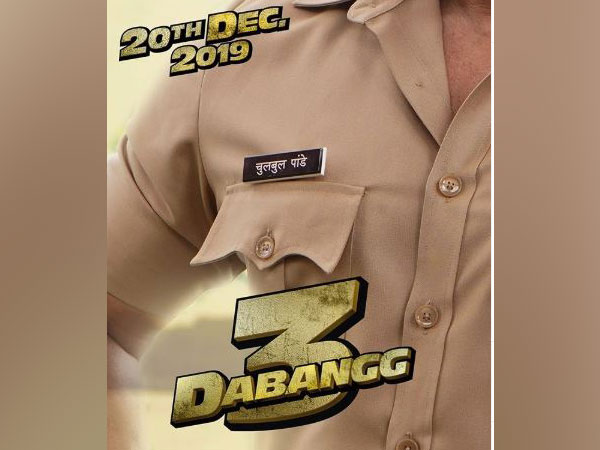 New Delhi [India], Oct 7 (ANI): Salman Khan who will be seen entertaining fans as Chulbul Panday in the upcoming film 'Dabangg 3' wrapped up the shooting.

Bollywood's 'Bajrangi Bhaijaan' uploaded a video on Twitter where he can be seen speaking about the last day of the shoot and also paid tribute to late veteran actor Vinod Khanna whose birthday happens to be on the same day of their pack up.
The character of Chulbul's father Prajapati Pandey which was played by the veteran actor is now being played by his brother Pramod Khanna.
Salman who can be seen with the entire crew of the film along with the director Prabhu Deva remembered the late actor.
"Today was the last day of Dabangg 3 and the happiest part is that today is the birthday of our V.K sir that is Vinod Khanna sir. So today is our Prajapati Panday's birthday and it happens to coincide with the pack up of our film," Salman can be heard saying in the video.
'Dabangg 3' is being helmed by Prabhu Deva. The film marks the second collaboration of Salman and the director. The two have previously worked together in 2009 hit 'Wanted'.
As per media reports, Arbaaz will once again be seen playing Makkhi in the film.
The movie is being produced under the banner of Salman Khan Films and Arbaaz Khan Production. It is scheduled to release on December 20, this year. (ANI)
ADVERTISEMENT