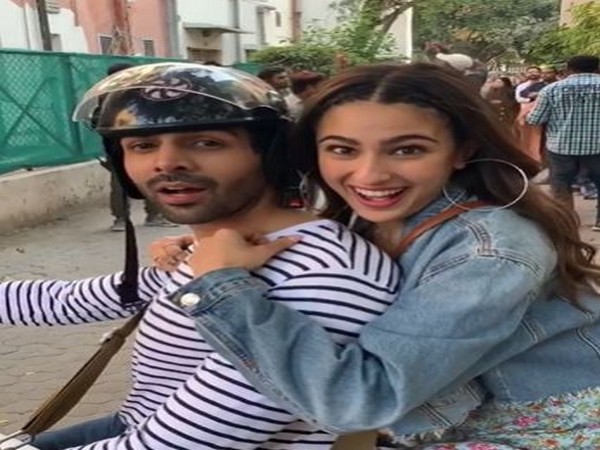 The actor took to Instagram to share the video in which she is seen seated behind Aaryan on a scooter.
Setting yet another style statement, Khan was seen slaying the layered look with her floral dress and a denim jacket over it.
The 24-year-old actor accessorised her look with hoop earrings, while Aaryan kept it simple with a striped T-shirt.
Besides her acting skills and on-point fashion sense, the actor is also known for chirpiness and amusing sense of humour. She wrote a funny caption speaking about the characters portrayed by her and Aaryan in the film.
"Zoe and Veer sitting on a bike. Both so different but expressions alike, Their excitement and enthusiasm is hitting a spike, Both hoping Shayad helps love chords to strike, Shayad out now! Link in bio," she captioned the picture.
'Love Aaj Kal' is the remake of the 2009 movie by the same name. The original movie featured Sara's father Saif Ali Khan and Deepika Padukone in the lead and explored two love stories set in different time periods.
The movie will feature Kartik Aaryan and Sara Ali Khan in the lead roles.
Directed by Imtiaz Ali, the movie also features Randeep Hooda and Arushi Sharma in significant roles. The movie, which is set to release on February 14, presents Kartik and Sara as Veer and Zoe. (ANI)
ADVERTISEMENT