Sara, Kartik comes up with 'Do It With A Twist' challenge 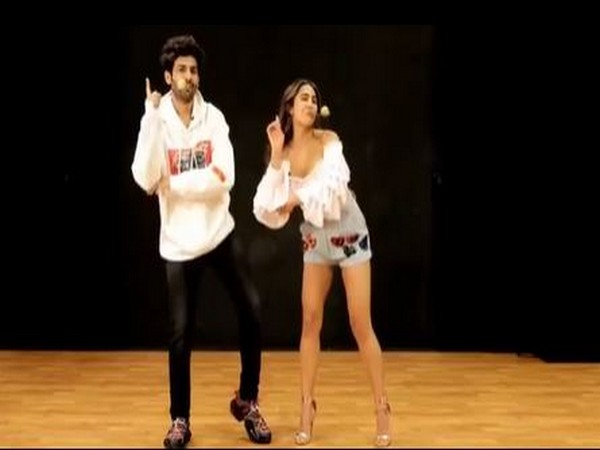 New Delhi [India], Feb 1 (ANI): Sara Ali Khan and Kartik Aaryan who are on a promotional spree for their upcoming movie 'Love Aaj Kal', has come up with a fun new challenge on Saturday - 'Do It With A Twist'.

The chirpy beauty of Bollywood introduced the new challenge to her followers by sharing a video on Instagram where the duo is seen dancing to their latest released song 'Haan Main Galat' from the upcoming romantic-comedy.
But the hook of the challenge is to do the dance step, with a twist. For that, the co-stars had a lemon and spoon in their mouth and started grooving to the songs.


Sara who is known for her amusing sense of humour while penning down the caption, wrote a rather rhyme-filled caption.
"The crazier the twistthe harder it is for us to resist. So come pump your fist. So come break a wrist. Add this to your to-do list. It's not something to be missed. I'm sure you get the gist. Dance to the Hook step and don't forget to #DoItWithATwist," the caption read.
[{3d07cbe2-e1f2-4235-8695-717faa34804a:intradmin/Sara_inline_1-2-20.JPG}]
In the challenge that marks 'the crazier, the better', Sara lost to Kartik.
The 'Pati, Patni Aur Woh' star, Kartik shared the same challenge video on his Instagram handle and wrote: "I win. Dance to the Hook Step and don't forget #DoItWithATwist #LoveAajKal #14thFeb#HaanMainGalat song out now.
[{b382f5fd-988a-45d3-b299-146720c09c44:intradmin/Kartik_inline_1-2-20.JPG}]
The groovy dance number 'Haan Main Galat' was released on Wednesday and it retains the signature tune of 'The Twist' song from Saif Ali Khan and Deepika Padukone-starrer 'Love Aaj Kal'.
'Love Aaj Kal' is the remake of the 2009 movie by the same name. The original movie featured Sara's father Saif Ali Khan and Deepika Padukone in the lead roles and explored two love stories set in different time periods.
The movie will feature Kartik Aaryan and Sara Ali Khan in the lead roles.
Directed by Imtiaz Ali, the flick also features Randeep Hooda and Arushi Sharma in significant roles. The movie, which is set to release on February 14, presents Kartik and Sara as Veer and Zoe. (ANI)