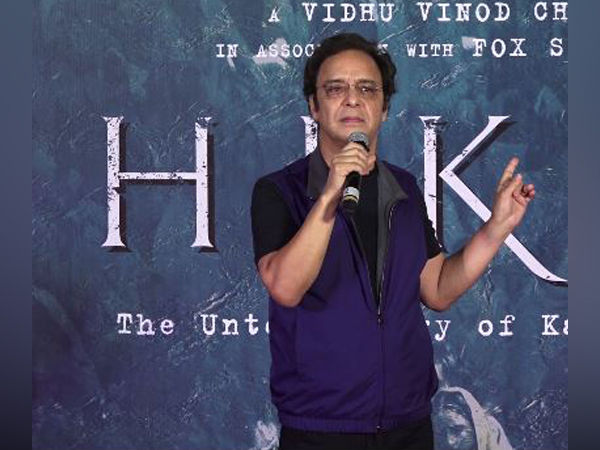 Mumbai (Maharashtra) [India], Jan 30 (ANI): Director Vidhu Vinod Chopra on Wednesday organised a special screening of his upcoming film 'Shikara' based on the exodus of Kashmiri Pandits from the Kashmir valley.

Chopra who himself is a Pandit from Kashmir said that the film is a tribute to the Pandit community.
"It's a tribute to the Pandit community, to us, to our mothers. Nobody listened to us for 30 years. Our story was hidden for the past 30 years," said the director.
"This is not a movie but a movement and the movement is that entire India should see our story now," he added.
Chopra further revealed that 'Shikara' is the first of its kind film as the people in the movie are those who have gone through the problem being portrayed.
"We didn't want to make a film that people see and say that yes, whatever happened was very bad, instead we wanted to make such a film where people see that despite everything we are standing on our feet, there is hope in our lives and we have settled well," said the 67-year-old director.
The film that has Vidhu Vinod Chopra at the helm narrates the story of the mass exodus of Kashmiri Pandits from the Kashmir Valley and the bond between the lead actors in the worst of times.
The flick is largely shot in the valley of Kashmir and is being promoted mainly as a journey of love between the lead couple.
The film has been produced by Vinod Chopra Productions and co-produced by Fox Star Studios. 'Shikara' is set to hit the theatres on February 7, 2020. (ANI)
ADVERTISEMENT