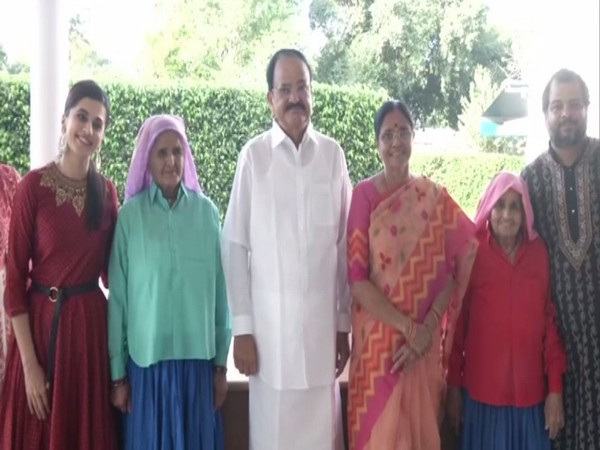 Taapsee was accompanied by two sharpshooters -- Chandro Tomar and Prakashi Tomar -- on whom the film is based.
Vice President Naidu, who extended his wishes to 'Mission Mangal' actor, also had a look at all the medals and certificates won by two shooters.
The debate about 'older' actors being cast for 'Saand Ki Aankh,' which is based on 60-year-old shooters, has been ongoing since the trailer was launched.
Playing the role of a 60-year-old character for the first time, Taapsee said that she had to undergo a lot of training to get into the layer of the character.
"The film was extensively shot in West UP including Meerut, Bagpat and many more," said Taapsee while talking to reporters here.
"To understand and interpret the language was a bit challenging for us. Another difficulty was to do justice to the character, which is just double our age and we have no experience of it," she added.
Taapsee had a quick reply to all the trolls that stormed the social media about casting young stars for essaying roles which are double their age.
"Such kind of trolls can never make me unhappy. It is very hard to make me unhappy. There were people who wanted to work on this film but couldn't get an opportunity to work fortunately or unfortunately. But I think I am among those lucky ones who got the chance to work in this film," said she. (ANI)
ADVERTISEMENT