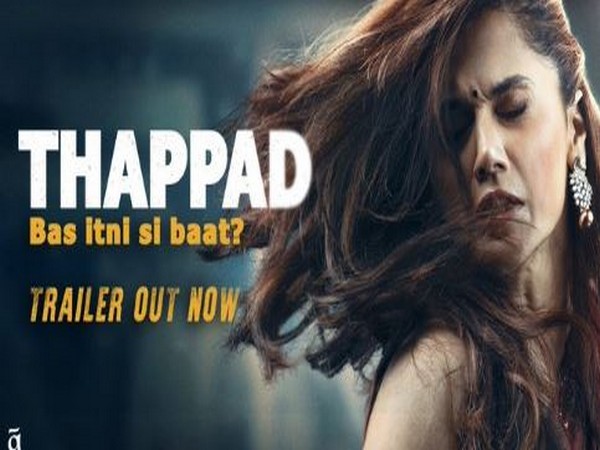 New Delhi [India], Jan 31 (ANI): A day after sharing the first look poster of the film, makers of 'Thappad' on Friday dropped its power-packed trailer which deals with the social issue of domestic violence.

The thought-provoking trailer of the film features Taapsee Pannu in the lead role as a housewife named Amrita.
The trailer begins with an advocate asking Amrita as to why "just a slap" by her husband is making her leave him, to which she gives a bold reply, "Just a slap, but no he can't do it."
The video then narrates the story where the lead is seen happily living her married life devoted to her husband and her family, when suddenly at a party her enraged husband slaps her on the face.
The trailer further follows a trail of questions and answers where Pannu is seen shutting mouths with her intolerance towards physical abuse.
At several instances, the trailer throws in important questions about gut-wrenching subjects like reasons for domestic violence against women, tolerance of abuse in romantic relationships and gender dynamics in relationships.
Actor Taapsee Pannu shared the trailer of the film on her social media and tweeted, "Haan bas EK THAPPAD ..... par nahi maar sakta."
With the trailer speaking about gender roles in the society, it ends with the name of the Director Anubhav Sinha being written as 'Anubhav Sushila Sinha' honouring his mother.
Coming from the makers of cinematic marvels like 'Article 15' and 'Mulk', the film features Ratna Pathak Shah, Manav Kaul, Dia Mirza, Tanvi Azmi, and Ram Kapoor in pivotal roles.
The film will hit the theatres on February 28 this year. (ANI)
ADVERTISEMENT