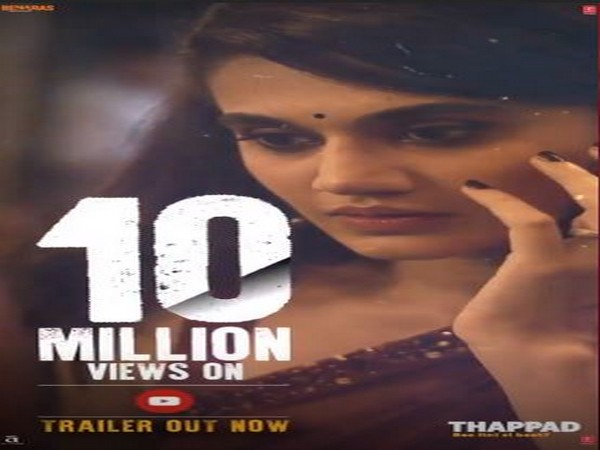 New Delhi [India], Feb 2 (ANI): 'Thappad' featuring Taapsee Pannu was dropped on Friday and within two days' span, it has shot up to an overwhelming 10 million views.

The leading actor took to her Instagram account to share the pleasing response to the trailer from audiences. The thought-provoking trailer of the film features Taapsee in the lead role as a housewife named, Amrita.
The trailer begins with an advocate asking Amrita as to why 'just a slap' by her husband is making her leave him, to which she gives a bold reply, 'Just a slap, but no, he can't do it.'
The video then narrates the story where the lead is seen happily living her married life devoted to her husband and her family, when suddenly at a party her enraged husband slaps her on the face.
The trailer further follows a trail of questions and answers where Pannu is seen shutting mouths with her intolerance towards physical abuse.
In several instances, the trailer throws in important questions about gut-wrenching subjects like reasons for domestic violence against women, tolerance of abuse in romantic relationships and gender dynamics in relationships.
The film is all set to reach the big screens on February 28 this year. (ANI)
ADVERTISEMENT