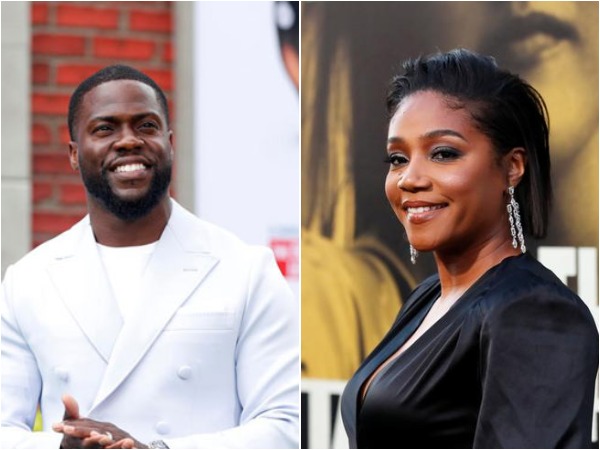 Washington D.C. [USA], Sept 8 (ANI): Actor-comedian Kevin Hart is on the road to recovery after a car crash on Sunday that left him with major back injuries for which he also underwent surgery.
Hart's long-time friend and actor Tiffany Haddish gave an update about the comedian's health at the Harper's Bazaar Icons party, reported People.

"He's okay. He's doing fine. As far as I know, from the last I heard, he's fine," Haddish told Entertainment Tonight.
The 39-year-old actor added, "He's already walking. He's good," noting that Hart's "back gonna hurt."
Haddish also said that Hart once teased her about her own injury.
"He was making fun of me because I tore my meniscus," she recalled.
"I was wearing a boot while we were doing press for Secret Life of Pets 2. I had a sleeve on my leg, a brace, and he was making fun of me, talking about, 'Tiffany, you ain't gonna get no man. Ain't no man gonna want you with a brace on your leg. You need to get the surgery.' And I said, 'I don't have time to get surgery. I'm gonna let my body do what it do and heal itself.'"
"And look, I'm rocking high heels and I'm walking ... And now I'm gonna make fun of you. When you get back, moving good, Kevin, I'm coming for you. I'm coming for your back," she jokingly said.
Recently-released audio from the 911 call made after the comedian's car crash revealed the actor was "not coherent at all" following the incident.
In the audio obtained by the Today show, a woman told a 911 operator, "I need someone to come get him."
When asked by the operator for details of the accident, the woman said, "I don't know what happened. He's just here. He's not coherent at all," before adding, "He can't move."
Sources told the outlet that doctors completed a successful back surgery on Hart after he was brought injured. He is expected to stay in the hospital for a few more days while he recovers completely from his injuries and is being kept under thorough observation.
The 40-year-old star was left injured when his vintage Plymouth Barracuda veered off the road in California on Sunday morning. The actor was a passenger in his car when its driver, friend Jared Black, lost control and crashed through wooden fencing just before 1 am on Mulholland Highway in Malibu, a spokesperson for the California Highway Patrol shared.
The car crashed about 10 feet off the road and into a ditch, leaving Black and Hart with "major back injuries," TMZ reported on Sunday. A third occupant, Black's fiance Rebecca Broxterman, was unharmed. Hart left the scene and headed to his home nearby, but was later treated for his injuries at a local hospital.
On the work front, Hart is set to appear in 'Jumanji: The Next Level' later this year, and he will also feature in 2020 drama film, 'Fatherhood.'(ANI)