We bet you didn't know about this habit of Kangana Ranaut! 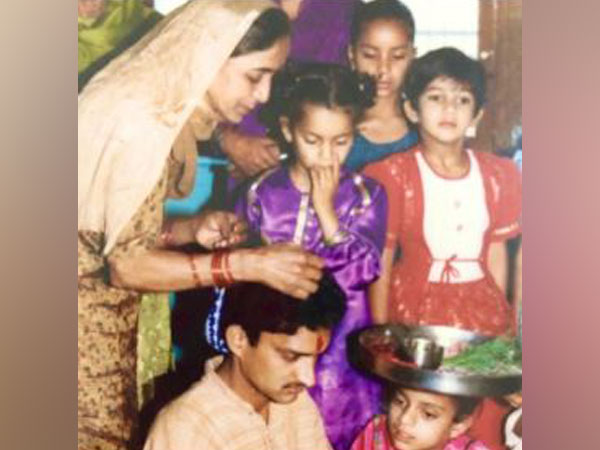 New Delhi [India], Oct 3 (ANI): We all have weird habits and some embarrassing secrets but when you have an elder sibling you can't expect them to guard the secrets forever!

Kangana Ranaut's sister, Rangoli Chandel today revealed one habit of her younger sister who is an acclaimed actor now and sadly, Kangana can't even deny it as Rangoli has a proof of it!
Taking to Twitter, Rangoli informed her followers that Kangana used to suck her thumb as a kid.
"Enough of serious talk on twitter will tell you lil secret about Kangana, Kangana used to suck her thumb when she was tiny, she grew up but won't leave this habit, father realised it's affecting the growth of her left thumb, he took her to the doctor together they taped..(condt)," she tweeted.
According to her, one fine day their father noticed that her habit was affecting the growth of her thumb and so he took her to a doctor.
After the doctor visit, chillies and neem would be applied on her thumb, however, it did not work. At last, Kangana's father ordered to "smack" her and pull the thumb out of his mouth if they spot her doing it.
"Contd)....it applied mirchi or neem on it but nothing worked, exasperated father passed an order in home whosoever sees her sucking her thumb can smack her and pull it out of her mouth, she would find places to hide but all the children ganged up on her...(contd)," she continued.
Kangana would find places to hide herself but children ganged up against her. One day, she went to her father and complained that children still hit her even though she sucks her fingers now. This left her father in splits and the order was lifted.
"(contd)...one day she went crying to papa and said papa they are still hitting me even though I am sucking my fingers now, father laughed hard and cancelled that rule, found a picture of her in action at Bablu chachu wedding," she revealed. 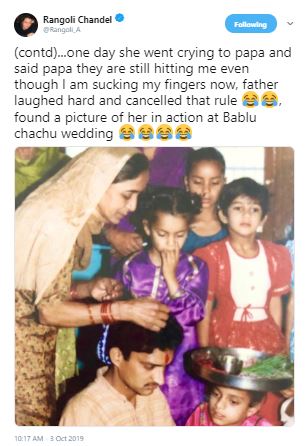 Finally, when she was 13-year-old, Kangana stopped sucking her thumb without any intervention. Rangoli revealed that Kangana never used to play with kids but instead used to find places to suck her thumb and sleep
"She never played with anyone, we never heard her voice either, there was a lemon tree in our courtyard she cud b found under its shade sucking her fingers & dozing off one fine day when she was 13 we all noticed she doesn't do it anymore, when & how she left no one knows, strange," wrote Rangoli.
Currently, Kangana is prepping up for her upcoming flick 'Thalaivi' which is based on 'iron lady' Jayalalithaa. The film is expected to go on floors post-Diwali near Mysore. The biopic will be titled 'Thalaivi' in Tamil and Telegu while it will be called 'Jaya' in Hindi. (ANI)
ADVERTISEMENT