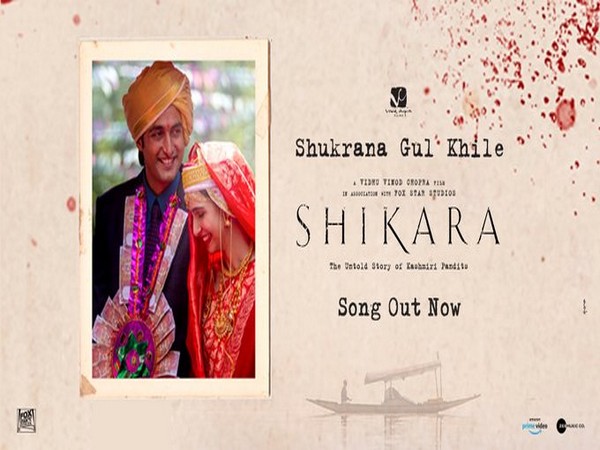 Director Vidhu Vinod Chopra announced the release of the song and tweeted, "An authentic Kashmiri Pandit wedding of yesteryears. Song out now."
With Kashmiri music setting the tone in the background, the song shows the wedding celebrations of the lead duo.
The authentic folk music of the song sung by Munir Ahmad Mir and written by Bashir Arif gives a slice of the Kashmiri culture to the audience.
The video starts with musicians playing traditional instruments and relatives of the couple clapping, dancing and celebrating the wedding.
It further proceeds with the lead couple, Shiv and Shanti, entering the celebrations and getting pictures clicked with their relatives.
With the celebrations of the wedding, the video shows the outbreak of conflict in a parallel note.
The film narrates the story of the mass exodus of Kashmiri Pandits from the Kashmir Valley in 1990 and the bond between the lead actors in the worst of times.
The film showcases 40,000 real migrants of Jagti and other camps. It also has real footage from the time of the mass exodus.
The flick is largely shot in the Kashmir Valley and is being promoted mainly as a journey of love between the lead couple.
The film has been produced by Vinod Chopra Productions and co-produced by Fox Star Studios. 'Shikara' is set to hit the theatres on February 7, 2020. (ANI)
ADVERTISEMENT