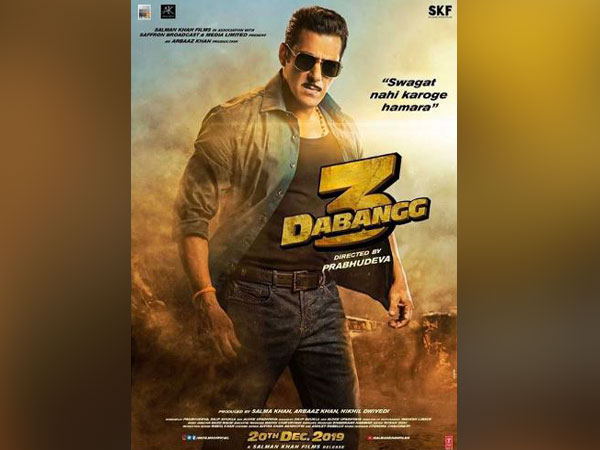 In the clip, Salman dons black shirt, paired with denim pants and brown leather shoes. 'Bhai' adds the good-old Chulbul Pandey touch with the masculine moustache and intense look on his face.
While the first poster featured his popular dialogue from the 'Dabangg' series "Swagat Nahi Karoge Humara?", this time Salman twisted it to "Swagat Toh Karo Humara."
"Aa Rahe Hain! Chulbul Robinhood Pandey. Theek 100 din baad. Swagat Toh Karo Humara! #100DaystoDabangg3," Salman wrote alongside the link of the video.
Sonakshi, who made her Bollywood debut with the 2010 movie 'Dabangg', plays Chulbul Pandey's wife Rajjo in the film.
Salman kicked off the shoot for the film on April 1 when he jetted off to Maheshwar, Madhya Pradesh to shoot with Arbaaz Khan and Prabhu Deva.

'Dabangg 3' is being helmed by Prabhu Deva. The film marks the second collaboration of Salman and the director. The two have previously worked together in 2009 hit 'Wanted'.

As per media reports, Arbaaz will once again be seen playing Makkhi in the film.

The movie is being produced under the banner of Salman Khan Films and Arbaaz Khan Production. It is scheduled to release on December 20, this year. (ANI)
ADVERTISEMENT